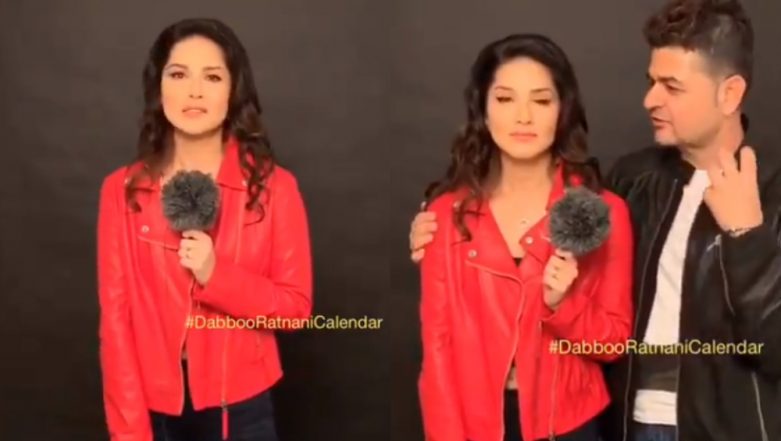 Dabboo Ratnani is all set to launch his annual celebrity calendar once again. The 2019 calendar will feature some familiar faces while new faces like Kiara Advani will make her debut. Amongst the known faces we have Sunny Leone making a splash. The Laila Main Laila actress has posed for the calendar this year in a red leather jacket and, boy, she sizzles. She took to her social media pages to share a BTS video of the shoot. Through the video, Sunny shows us the funny side of her personality. She jokes that she is ready to turn studio manager for Dabboo for free, given if she features on the calendar every year. Sunny Leone Tells Kareena Kapoor: Indians Are Not Given Enough Credit for Being Open-Minded [Watch Video].

This is the 20th anniversary of Dabboo's annual celebrity calendar. This will be Sunny Leone's second year in the row to feature on the same. In the video, the actress talks about what all she has done to earn a spot, including not eating for days before the shoot to look perfect. She even complains that the ace photographer ignores her calls and makes her stand outside the studio for the shoot. Dabboo Ratnani 2019 New Year Calendar: Kiara Advani Will Debut in the Glamorous Celebrity Calendar, Watch Her BTS Video.

Well, jokes aside, we are sure Sunny Leone's shots for Dabboo Ratnani calendar 2019 are no less than enigmatic.

Hey guys! Yay I made it to the 2019 @DabbooRatnani @ManishaDRatnani Calender! So super excited. One clip of us just being silly. Thanks Daboo and Manisha! pic.twitter.com/6YBPoKV1qB

On the work front, Sunny is quite busy these days. The actress will be seen in the Tamil war drama Veeramadevi. She was seen hosting MTV Splitsvilla Season 11. The season 2 of her semi-biopic web series Karenjit Kaur was a huge hit on the internet. We hope to see a season 3 soon.