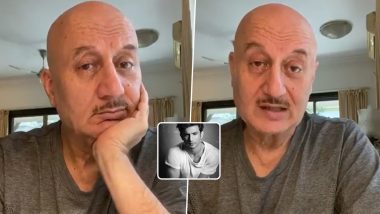 Senior Bollywood actor Anupam Kher on Tuesday broke his silence around Sushant Singh Rajput's death case, saying people must raise their voices, to ensure the case is reaching a "logical solution". The 65-year-old actor, through a video message posted on Instagram, noted that without criticising anyone, and as being an artist, or in the name of humanity, it is our duty to help bring the case to a "logical end". The 'Kuch Kuch Hota Hai' actor urged people to raise their voices now as Rajput's family, friends, colleagues, and fans who loved him "deserve to know what caused his death." Sushant Singh Rajput Case: Dino Morea Rubbishes Rumours of Hosting Late SSR At His House Party, Says ‘Do Not Drag My Name into This’

Adding a hashtag of "Justice for Sushant", the 'Veer-Zaara' actor wrote: "So much has been said, there are so many conspiracy theories, but it is not about who stands on which side anymore, it is about ensuring, that this case reaches a logical conclusion. We must know the truth." Earlier today, Bihar Chief Minister Nitish Kumar said that he will be recommending a CBI inquiry into the Sushant's death case. Kumar said that the late actor's father had earlier in the day held talks with the Director-General of Police (DGP), Bihar and he has given his consent for a CBI inquiry to be conducted in the case. Sushant Singh Rajput Case: Bihar Police Can Visit Mumbai to Get Information But Cannot Investigate the Matter, Says Shiv Sena’s Sanjay Raut

This is the least we owe him. This is the least we can do for him. Sushant’s family deserves to know the truth. His friends, colleagues, loved ones and millions of fans who loved him deserve to know what caused his death. If we have any humanity left, then we must raise our voices today. So much has been said, there are so many conspiracy theories, but it is not about who stands on which side anymore, it is about ensuring, that this case reaches a logical conclusion. We must know the truth.🙏#JusticeforSushant

An FIR was filed by Patna Police against actor Rhea Chakraborty in the Rajput's death case, on a complaint filed by KK Singh, under several sections of the Indian Penal Code (IPC) including abetment of suicide. A team of Bihar Police is in Mumbai to probe the case. According to Mumbai Police, the statements of 56 people have been recorded till now in connection with the case, including the family of the actor, his domestic help, and several industry persons. Rajput was found dead at his Mumbai residence on June 14. (ANI)