It is being said that Deepika is upset about the fact that he offered Gangubai Kathiawadi to Alia Bhatt and had kept her as the second option after Priyanka Chopra for the film. 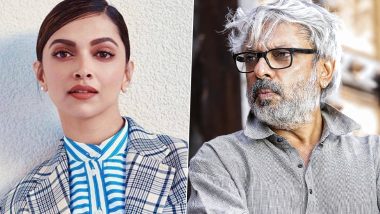 Deepika Padukone and Sanjay Leela Bhansali are a dynamic director-actor duo, who have given films like Ram Leela, Bajirao Mastani and Padmaavat to the audience. All these films have done massively well on the screen and we all are very much aware of the special bond that Deepika and SLB share. However, things are said to be a little rocky between the two. Rumours have it that Deepika has been rejecting every project coming from SLB. Sanjay Leela Bhansali Fulfills Deepika Padukone’s Dream of Working With Salman Khan.

A source close to the development told Bollywood Hungama, "Sanjay Leela Bhansali offered Deepika a dance number in Gangubai Kathiawadi, however, the actress denied the offer. The filmmaker later on went ahead to offer her the option of being in a key role in Heera Mandi, or a dance number in the web show, however, Deepika refused to be a part of it." It is being said that Deepika is upset about the fact that he offered Gangubai Kathiawadi to Alia Bhatt and had kept her as the second option after Priyanka Chopra for the film.

"Attempts are being made to resolve the unsaid misunderstandings, and we are optimistic that it will be all cleared and Deepika will do Baiju Bawra. SLB will definitely speak to the actress, as she is very dear to him, like a family and he wouldn't want to miss out on the chance of working with her again. Right now, he is just too busy with Gangubai Kathiawadi," added the source. Deepika Padukone Meets Sanjay Leela Bhansali! A Fourth Film On the Cards?

Apart from this, Deepika's kitty is filled with promising projects in her kitty. She will be seen in Pathan alongside Shah Rukh Khan. She will also be seen opposite husband Ranveer Singh in Kabir Khan's '83. She will essay the role of Kapil Sharma aka Ranveer Singh's wife in the film. She also has a film with Prabhas and Amitabh Bachchan. She is also working on a film revolving around the epic saga Mahabharat and will be seen alongside Hrithik Roshan in Fighter. She will also feature in Shakun Batra's film alongside Ananya Panday and Siddhant Chaturvedi. As for Gangubai Kathiawadi, the films all set to hit the theatres on July 30.

(The above story first appeared on LatestLY on Mar 28, 2021 11:55 AM IST. For more news and updates on politics, world, sports, entertainment and lifestyle, log on to our website latestly.com).