Did Akshay Kumar's Promotional Song For Bhumi Pednekar's Durgamati - The Myth Get Cancelled For This Reason? (LatestLY Exclusive)

Akshay Kumar was supposed to shoot a promotional song for Durgamati but the plan went bust due to COVID-19. Durgamati - The Myth starts streaming from December 11 on Amazon Prime Video. 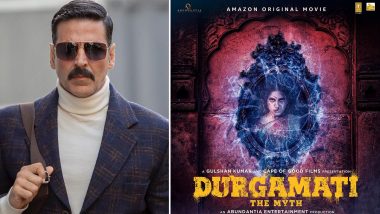 Akshay Kumar is backing Durgamati- The Myth starring Bhumi Pednekar. The actor had also backed another Hindi film as a presenter and that was Fugly. If you remember, Salman Khan too held similar credits for Fugly. So at the end of the movie, we saw a promotional song with both Akshay and Salman in it. It turns out something similar was planned for Durgamati as well. A source close to the project told us that Akshay was supposed to shoot a promotional song for the horror movie but COVID-19 played spoilsport. Durgamati The Myth Trailer: Bhumi Pednekar Is Held for Interrogation in a Haunted Mansion in This Chilling Promo (Watch Video)

"Due to the lockdown first and then a long list of movies that Akshay was wrapping up in a jiffy, we couldn't shoot the song on time. So now Durgamati will release without it," the source revealed. The supernatural thriller will stream on Amazon Prime Video from December 11.

There were murmurs that Durgamati underwent a name change to avoid controversies just like Laxmii. The trailer is out and while it isn't better than the original Bhaagamathie, it will definitely make a few of the horror fans interested in the movie even when the scares are all run-of-the-mill.

(The above story first appeared on LatestLY on Nov 25, 2020 02:04 PM IST. For more news and updates on politics, world, sports, entertainment and lifestyle, log on to our website latestly.com).