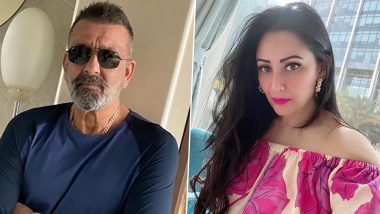 Bollywood actor Sanjay Dutt has resumed his shooting amidst his cancer treatment. The Bollwood actor has been diagnosed with lung cancer and he immediately started with his treatment in Mumbai Hospital. He has already completed with his first process of chemotherapy. Sanjay Dutt Gets His Five-Year US Visa, May Start His Cancer Treatment There

The Bollywood actor is now ready to return to shooting for his next venture Shamshera before he starts with his second cycle of treatment.According to a report in ETimes. Sanjay Dutt will shoot for two days before his next round of treatment starts in next week. The actor has some pending wors on his ongoing projects which he has decided to finish off before he starts with  his second procedure of treatment. Sadak 2 Full Movie in HD Leaked on TamilRockers & Telegram Links for Free Download and Watch Online, Alia Bhatt-Sanjay Dutt's Film is the New Victim of Piracy?

The actor's wife, Maanayata, shared an appreciation post for the actor's decision to finish off all his pending works before he heads to the second round of medical treatment. She has shared a picture of the Shamshera actor in her social media handle with a beautiful enthusiastic and applauding caption.

The actor was hospitalised for his breathing problem and chest discomfort recently. He shared to take a break from his work for medical treatment earlier on August 11. Bollywood's Sanju Baba is currently working on some forthcoming  intriguing projects- KGF:Chapter 2, Bhuj:The Pride Of India , Torbaaz and Shamshera.

The Bollywood actor started his career in 1982 with the film Rocky. Since then the actor has been ruling the industry. Let us pray for his speedy recovery!

(The above story first appeared on LatestLY on Sep 08, 2020 03:03 PM IST. For more news and updates on politics, world, sports, entertainment and lifestyle, log on to our website latestly.com).