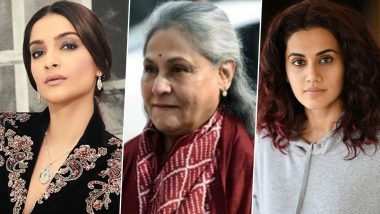 In the monsoon session of parliament, actress and MP Jaya Bachchan raised some important questions as she spoke about the social media trolling and conspiracy of defaming the industry that has been going in the wake of Sushant Singh Rajput's death and the drug probe following the same. In a strongly-worded speech, Jaya Bachchan asked for government support stating how celebrities are among the highest taxpayers of the country and that they always step up when it comes helping the nation and government during any crisis. Bachchan's speech has now been going viral and actress Sonam Kapoor recently shared the same. Jaya Bachchan Raises Issue Of 'Conspiracy to Defame Bollywood' In Monsoon Session Of Parliament.

Jaya Bachchan's speech has left everyone impressed, especially those from the industry who have been unhappy with the kind of online abuse they have been facing after Sushant Singh Rajput's death. Taking to Twitter, Sonam shared Jaya Bachchan's speech and wrote, "I want to be her when I grow up.." Not just Sonam Kapoor, among other celebrities Taapsee Pannu also hailed Jaya Bachchan's parliament statement and wrote, "For we have always stood by the initiatives, causes and awareness campaigns. It’s time for payback. Hitting the nail on its head and how ! Clapping hands sign yet again a woman from the industry spoke up."Jaya Bachchan Removes Mask Before Speaking in Parliament, Venkaiah Naidu Says 'Itna Sundar Acha Personality Aapko Dekhne ko Mil Raha Hain' to a Member Who Objects.

I want to be her when I grow up.. https://t.co/gXMBGu1ifA

For we have always stood by the initiatives, causes and awareness campaigns. It’s time for payback. Hitting the nail on its head and how ! 👏🏼 yet again a woman from the industry spoke up 🙏🏼 #Respect https://t.co/CVz1cTlCNw

For the uninitiated, Jaya Bachchan in the monsoon parliament session, in a powerful statement said, "The entertainment industry in our country provides direct employment every day to five lakh people and indirect employment to five million people. At a time when the financial situation is in a depressing state and employment is at the worst level, in order to divert the attention of the people, we are being used to be flogged by social media and the government's non-support. But people who have made their name in this film industry have called it a gutter. I completely disagree."

(The above story first appeared on LatestLY on Sep 15, 2020 02:53 PM IST. For more news and updates on politics, world, sports, entertainment and lifestyle, log on to our website latestly.com).