Sidharth Shukla and Neha Sharma are struck by the cupid's bow In this latest BTS photo from the song. Check it out. 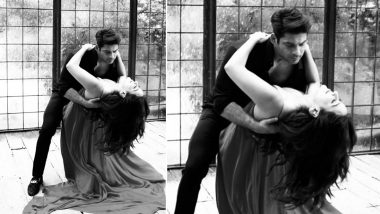 Bigg Boss 13 winner Sidharth Shukla and Neha Sharma's upcoming song Dil Ko Karaar Aaya is all set to release on July 31, 2020. Even though two days are left for the song to go public, the buzz around the same is at the top. However, amid this, a new behind the scene picture of Shukla and Sharma has been doing rounds on the internet wherein the chemistry of the two is HOT. The pair look extremely sexy in the photo and we are sure that in sometime it's going to trend on social media. Dil Ko Karaar Aaya: Sidharth Shukla Shares a Glimpse From His Upcoming Music Video Opposite Neha Sharma and Fans Can’t Contain the Excitement!

The photo which has been surfacing online sees Neha and Sidharth in the midst of dancing. The actress can be seen wearing a thigh-high slit dress whereas the man looks dapper in a black tee. Not to miss, Shukla's unbuttoned shirt. Must say, the monochrome pic will surely make you go yes Dil Ko Karaar Aaya for sure. You cannot miss this one. Dil Ko Karaar Aaya First Look: Sidharth Shukla and Neha Sharma's Chemistry Looks Palpable (View Pic)

Check Out The BTS Picture Of Sidharth Shukla and Neha Sharma Below:

Sidharth Shukla was last seen in a song Bhula Dunga opposite his Bigg Boss 13 co-contestant Shehnaaz Gill. This one is sung by Neha Kakkar and Yaseer Desai whereas the music is composed by Rajat Nagpal. Meanwhile, as per reports, Shukla has been confirmed to be part of Broken But Beautiful 3 web-series. Stay tuned!

(The above story first appeared on LatestLY on Jul 29, 2020 05:23 PM IST. For more news and updates on politics, world, sports, entertainment and lifestyle, log on to our website latestly.com).