Kanye West Pees on His Grammy Award in Viral Video After Tweeting Pages From Universal Music Contracts, Here’s Why the American Rapper Is So ‘Pissed’ With the Music Label 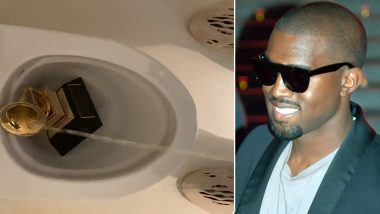 American rapper Kanye West has been making the headlines recently, after a storm of tweets displaying his various contracts with the Universal Record. Now, he posted a video that shows him peeing on one of his Grammy awards. The clip instantly went viral on social media, garnering millions of views with many pointing out that his act was disrespectful. But why he did so? His latest act is related to his ongoing feud with the entertainment company, Universal Records. Kanye captioned the viral video with, “Trust me… I WONT STOP,” hinting what he meant by it. In this article, we will bring the detailed reason of his latest acts that created quite a buzz on social media and why he is so 'pissed' with the music label. Kanye West Apologizes To Wife Kim Kardashian For Going 'Public With Private Matter' and 'Hurting.'

In the bizarre eight-second video, the rapper’s award can be seen in the toilet as he urinates over it. “Trust me… I WONT STOP,” reads the caption as part of his Twitter meltdown overnight which saw the 43-year-old slamming musicians’ lack of rights owning their own master recordings. Netizens Urge Kanye West to Seek Help After His Anti-Abortion Meltdown and Shocking Revelation About Kim K During His First Presidential Campaign Event in South Carolina.

Trust me ... I WONT STOP pic.twitter.com/RmVkqrSa4F

Why Did Kanye West Urinate on His Grammy?

As we mentioned at the beginning of this article, Kanye has been very vocal about black ownership in the industry. He referred to the music industry as “modern day slavery,” in one of his tweets before sharing various pages of his Universal Music contacts he has acquired claiming that he has received unfair contracts and wants “every lawyer in the world,” to look through them. Taylor Swift Was Denied by Scooter Braun and Scott Borchetta From Performing Her Old Songs at AMAs.

I forgive everyone from the music industry that is involved with modern day slavery. Vengeance is only the lords.

According to reports, in the early 2000s, the 21-time Grammy winner signed with Roc-a-Fella Records through Def Jam, which is a subsidiary label of Universal Music Group. In addition, he established his music label, GOOD Music under Def Jam as well. “UNIVERSAL WONT TELL ME WHAT MY MASTERS COST BECAUSE THEY KNOW I CAN AFFORD THEM,” read one his tweets. “MY CHILDREN WILL OWN MY MASTERS… NOT YOUR CHILDREN…MY CHILDREN… MY CHILDREN,” read another tweet.

Kanye went on tweeting, “OK GUYS CHECK THIS OUT ... I DONT HAVE A CONTRACT WITH UNIVERSAL ... I HAVE TEN. THEY TRY TO BURRY US ALIVE.” Through his Twitter rant, the singer elaborated that a standard record deal is a trap to never have one recoup and contracts include many hidden costs such as the ‘distribution fees.’ Adding the same, he accused the labels of putting such costs in their contracts to earn more money off an artist’s work.

OK GUYS CHECK THIS OUT ... I DONT HAVE A CONTRACT WITH UNIVERSAL ... I HAVE TEN 🤣 THEY TRY TO BURRY US ALIVE

You can check his entire series of tweets with photos of his contracts with the music label on his official Twitter account. He even added that he wouldn’t be releasing any more music, until he is done with the contract with Sony and Universal. His battle with the music labels over owning rights is clear to the world now, and it does not seem that the feud will stop anytime soon.

(The above story first appeared on LatestLY on Sep 17, 2020 01:05 PM IST. For more news and updates on politics, world, sports, entertainment and lifestyle, log on to our website latestly.com).