The Suicide Squad New Poster Out! Director James Gunn Reveals The Trailer Will Be Out On March 27

The Suicide Squad's new poster is out. It looks quite rad, The trailer is expected to release tomorrow while the movie will hit both the theatres and HBO Max on August 20, 2021. The film stars Daniela Melchior, Peter Capaldi, Julio Ruiz, Jennifer Holland, Viola Davis, Idris Elba, and Margot Robbie, John Cena and many more. 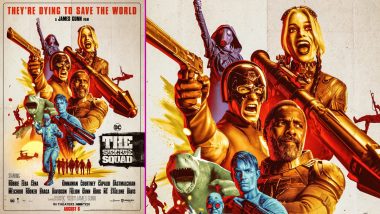 James Gunn dropped the new poster of The Suicide Squad today morning and it looks exactly how the fans would have wanted it. As you all are aware, this is a villain team-up that is eclectic and quite interesting. Viola Davis, Margot Robbie, Jai Courtney, and Joel Kinnaman are obviously reprising their roles from the 2016 version of Amanda Waller, Harley Quinn, Captain Boomerang, and Rick Flag.  Idris Elba has replaced Will Smith in this version but he will not play Deadshot. Dune, The Suicide Squad, Mortal Kombat New Footage Revealed in HBO Max’s New Trailer of Their Warner Bros 2021 Slate

As per a Variety story, Elba has been given a new character Bloodsport. Reports suggest Gunn wrote the character for Elba. The latter thus becomes yet another actor who is in all superhero universes from Marvel to DC. This poster perhaps gives the first look at what this new character will look like.

I'll just drop this here. Did I mention that a trailer is coming tomorrow? #TheSuicideSquad pic.twitter.com/VmB9n0rFSZ

The Suicide Squad will simultaneously release at the theatres and on HBO MAX on August 20.

(The above story first appeared on LatestLY on Mar 26, 2021 12:02 PM IST. For more news and updates on politics, world, sports, entertainment and lifestyle, log on to our website latestly.com).