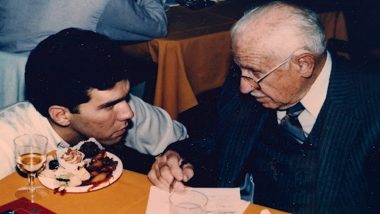 Well, who doesn’t know the Disney cartoon character Donald Duck? But do you know who is behind its unique voice that we all admire and love? Tony Anselmo is an American voice actor and animator who has been the official character voice of the famous Donald Duck since 1985. Born in Salt Lake City, Utah, US, Anselmo developed an early fascination with Disney as a four-year-old after seeing his first movie, Mary Poppins.

Identifying his penchant and curiosity in the world of Disney, he didn’t just want to watch it, but to play a significant role in it. Anselmo’s family moved to Sunnyvale, in northern California, when he was seven, and he continued to actively study Disney animation.

Anselmo attended Marian A. Peterson High School where his natural talent for draftsmanship developed. As a student, Anselmo used to imitate his teachers, giving an impetus to another interest he had. To materialize his dream, Anselmo began drawing and experimenting in traditional animation with a Super 8 camera. He started to cultivate that talent with night art classes at local colleges and was in constant communication with the artists who animated Walt Disney’s films, including Frank Thomas, Ollie Johnston, Eric Larson, Jack Hannah, and Milt Kahl. Anselmo says, “Ollie wrote a lot and sent me drawings, advising me to learn quick sketch, life drawing, acting, and design.”

With the support and encouragement of his Disney Animation correspondents, Anselmo attended the California Institute of the Arts on a full scholarship from the Disney Family. Anselmos says, “The Disney family’s support meant so much to me.”

He began his studies in the Character Animation Department at CalArts in fall 1978. The department head was Jack Hannah, who was the director of the Donald Duck unit under Walt Disney.

After his second year, Anselmo was asked to report for work at Disney's Feature Animation department in Burbank, California. Anselmo says, “Ron Miller just set up a program called the Disney School of Animation on the lot with Don Hahn, to train new artists in carrying on Walt’s traditions in character animation. We weren’t even in production. We were paid to animate tests under Eric Larson, studying life drawing with Walt Stanchfield, and learning even more than we had at CalArts. It was an immersion in Disney character animation. That hasn’t happened since. I was honored to be a part of that.”

In subsequent years, Tony contributed to the animation of more than 20 Disney animated features, including The Little Mermaid, Beauty and the Beast, Aladdin, The Lion King, Tarzan, and The Emperor's New Groove.

One of the Disney stalwarts that Anselmo frequently encountered was Clarence Nash, the original voice of Donald Duck. Nash initially developed the voice as that of a nervous baby goat before Walt Disney decided it sounded like a duck. Anselmo’s friendship with Nash began casually. Anselmo says, "I was really just curious about it, because I could do voices, and that was one voice I couldn't do." Anselmo asked Nash about his technique. "It took me a long time to learn that. It took Clarence a while to perfect that as well,". The two continued their informal "training" in performing Donald's dialogue, "I think, in hindsight, one of the reasons Clarence spent so much time working with me on Donald's voice and personality before mentioning his plans for succession is that he wanted to make absolutely sure I would do that legacy justice before telling me." Anselmo was unaware that Nash had leukemia.

Nash passed away in 1985 after celebrating Donald Duck’s 50 Birthday. And Anselmo inherited the role of Donald Duck just as Nash had wished.

Certain things have remained. "I still use the original ribbon mic Clarence used,” Anselmo says. "It has a much warmer sound." Tony also remembers Clarence saying, “The Duck sounded really good that day.' I'd ask him, 'What do you mean?' and he'd say, 'Oh, some days Donald just sounded clearer than others and I don't know why.'" Anselmo continued to consult Jack Hannah as well with “Donald questions” until his passing in June 1994.

Anselmo's first performance as Donald was on a television program titled D-TV Valentine. He has also shared voice-over duties for Donald’s nephews, Huey, Dewey, and Louie since 1999. Anselmo worked as a voice actor for the Kingdom Hearts series, which features Donald Duck as one of three main characters. He also provided the voice of Donald in the video game Kinect Disneyland Adventures in 2011. Tony has voiced Donald in thousands of projects, including television, feature films, theme park attractions and shows, the Disney cruise line, and consumer products.

In September 2009, Tony Anselmo was named the Disney Legend. He is also known for his comprehensive collection of original Disney posters which culminated into an art book ‘The Disney Poster Book’ in 2002. Anselmo's extensive collection was used in many exhibits at The Walt Disney Family Museum in San Francisco during Diane Disney Millers time there in gratitude for his benefactors scholarship to CalArts.

(The above story first appeared on LatestLY on Jan 29, 2022 09:48 AM IST. For more news and updates on politics, world, sports, entertainment and lifestyle, log on to our website latestly.com).