Naam Tamilar Katchi leader Seeman on Sunday demanded Amazon Prime Video to stop streaming The Family Man 2 web series. Director Bharathiraja also sent out a statement requesting Amazon Prime to pull out the show. He threatened the platform saying that Tamils across the globe will boycott the streaming platform. 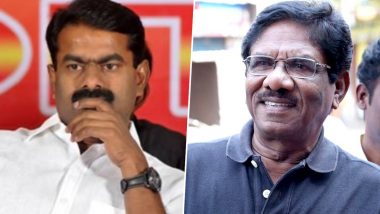 He expressed anguish over the series having been released on June 4 despite opposition from the Tamils across the world, and warned of massive protests if the screening was not stopped.

"If you fail to do so and ignore and disrespect our emotions, we Tamils across the globe may have to lead a massive campaign to boycott all Amazon services, including Prime Video," he said in a letter to Aparna Purohit, Head of India Originals at Amazon Prime Video, Mumbai. Seeman said the series portrayed the Tamil Eelam freedom struggle "cheaply, intending to tarnish Tamils image."

It is condemnable that the web series has been made to sound like the voice of the Sinhala government which allegedly invaded, dominated and annihilated the homeland of the Tamils, he said. Such series, he said, should never be screened as it contains "obnoxious content against Tamil and supports pro- Sinhala ideologies or any other race." The Family Man Season 2: MP Vaiko Writes to Union I&B Minister for Ban on Manoj Bajpayee and Samantha Akkineni Series.

Director Bharathiraja also sent out a statement requesting Amazon Prime to pull out the show. He threatened the platform saying that Tamils across the globe will boycott the streaming platform. Bharathiraja feels that the show insults Tamils, Muslims in India, and Bengalis.