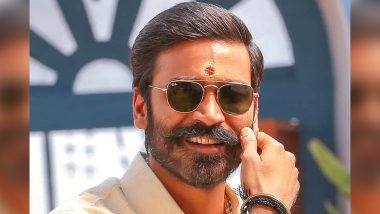 Dhanush celebrated his 37th birthday on July 28, 2020. Be it the family members or industry friends or fans, all extended heartfelt birthday wishes to the actor across social media platforms. From sharing his pictures to keeping common DPs and penning thoughtful messages, the Kollywood actor – director – producer is extremely overwhelmed. He has shared a statement on Twitter in which the superstar has extended his heartfelt thanks and greetings to all his well-wishers for remembering him and making his 37th birthday so special. Jagame Thandhiram Song Rakita Rakita Rakita: Makers Treat Dhanush Fans on His Birthday with the First Single and It’s A Mass Number!

The statement issued by Dhanush read, “I don't know how to thank my fans. Your affection has left me overwhelmed and at a loss for words! I have been seeing all your common DPs, mashups, videos, the countdown designs you have been making for the past three months...It gave me such joy, entertainment and happiness. Thank you so, so, much. Moreover, I have been following the social work that you have been engaged in. I am amazed by your enthusiasm and am extremely proud of all of you. I also thank my well-wishers from the film fraternity, social activists, politicians, and friends who took the time to wish me over the phone, print media, television and social media.” He also said, “To those who continue to shower their goodwill upon me. I wish to convey my heartfelt thanks and greetings.” Karnan: Makers of Dhanush’s Film with Mari Selvaraj Release Title Look on the Actor’s 37th Birthday.

Dhanush Thanks His Well-Wishers

On the work front, Dhanush will next be seen in Karthik Subbaraj’s film Jagame Thandhiram. He also has a project with director Mari Selvaraj and its title is Karnan. Stay tuned for further updates!

(The above story first appeared on LatestLY on Jul 30, 2020 10:16 AM IST. For more news and updates on politics, world, sports, entertainment and lifestyle, log on to our website latestly.com).