Pawan Kalyan and Jacqueline Fernandez's Next is a Period Comedy Set in the Mughal Era?

Jacqueline Fernandez is one of the lead actress in this two-heroine project with Pawan Kalyan. 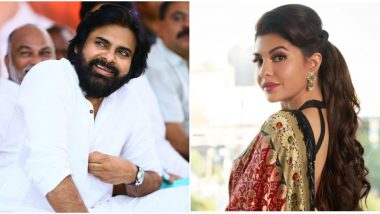 While we read reports of Ileana D'Cruz collaborating with Pawan Kalyan for Vakeel Saab, the Telugu remake of Amitabh Bachchan's Pink, here comes a new report around his next. As per reports in Pinkvilla, the actor is all set to work with Judwaa actress Jacqueline Fernandez for one of his projects and that's apparently a period comedy set during the Mughal era. The film will be directed by Krrish and the shooting will begin after the actor wraps shooting for Vakeel Saab.

The same report further states that the period drama will be mounted on a big scale and the audiences will be in for a treat. Since it's a war based movie with a dash of comedy, fans of Pawan Kalyan are expected to go gaga over it. Jacqueline will play one of the leads in this two-heroine project. The other actress is still being discussed but reports suggest that Mahanati actress Keerthy Suresh has been approached for same. Did Pawan Kalyan Gift Rs 5 Crore Flat to Ex-wife Renu Desai? Former Actress Clarifies in Her Facebook Post.

Keerthy is already in talks with the makers and she's expected to sign on the dotted lines very soon. Meanwhile, Arjun Rampal has been roped in as the prime antagonists in the film. The film is expected to hit the screens on Sankranti next year.

(The above story first appeared on LatestLY on Mar 12, 2020 05:12 PM IST. For more news and updates on politics, world, sports, entertainment and lifestyle, log on to our website latestly.com).