RRR: SS Rajamouli’s Next With Ram Charan and Jr NTR Gets Rs 348 Crore Deal for Its Theatrical Rights – Reports

SS Rajamouli's magnum opus RRR is one of the most anticipated projects down South. Another major highlight of the movie is that it will star Ram Charan and Jr NTR in one frame. Now, the latest we hear is that the period drama has been getting deals in crore for its theatrical rights. Read on. 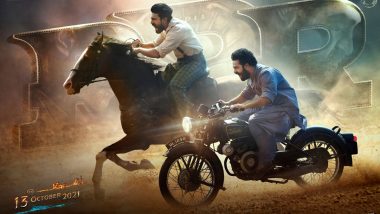 SS Rajamouli's magnum opus RRR is one of the most anticipated projects down South. Another major highlight of the movie is that it will star Ram Charan and Jr NTR in one frame. From the time the regional film was announced, fans are on cloud nine. That's not it, as the flick also has a surprise for Bollywood fans as it'll see Alia Bhatt and Ajay Devgn in it. All in all, RRR is packed with a solid punch. Now, the latest we hear is that this period drama has been getting whopping offers from exhibitors across India for its theatrical rights. Boney Kapoor Upset With SS Rajamouli Over 'RRR' Clashing With 'Maidaan' at Box Office, Calls It ‘Unethical’.

"The RRR team has received offers from Independent distributors from different territories of Southern states which amounts to Rs 348 crore. It’s going to be the biggest deal in the history of Telugu cinema, defeating the pre-release business of Bahubali 2, which had collected approximately Rs 215 crore from the South speaking states," a trade source said to Pinkvilla. RRR: Jr NTR's Heroine Olivia Morris’ First Look As Jennifer Is Enchanting!

This 348 crore offer is only for Tamil, Telugu, Kannada and Malayalam version, whereas the Hindi one will be released by AA Films (Anil Thadani) on a commission basis, adds the portal. Also, the report further elaborates that the Hindi version is mostly valued around Rs 100 crore whereas the overseas rights of RRR have already been sold to Phars Films for a huge sum of Rs 70 crore. Now, if you total everything, it means that film has already earned Rs 500 crore before its release. Huge!  Olivia Morris Plays Jennifer In SS Rajamouli's RRR; Here's What We Know About Her.

(The above story first appeared on LatestLY on Feb 05, 2021 08:40 PM IST. For more news and updates on politics, world, sports, entertainment and lifestyle, log on to our website latestly.com).