Bigg Boss 14's eliminated contestant Nishant Singh Malkhani has tagged Pavitra Punia and Eijaz Khan's one and off love story on the reality show fake. Check it out. 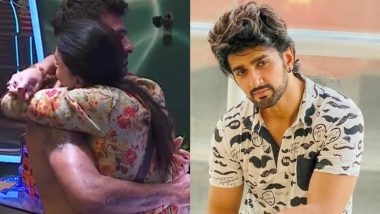 The controversial reality show Bigg Boss has seen many love stories blossoming on the show. However, this year two people in particular who are serving some mature pyaar to the audience are Pavitra Punia and Eiajz Khan. The two might argue and fight, but that does not define their relationship, as the other moment #PaviJaz can be seen indulging in a PDA. It was very recently when Farah Khan entered the Bigg Boss house, even she had praised them. All that being said, when eliminated contestant Nishant Singh Malkhani in an interview was asked about his take on any fake love story on the reality show, his answer was Pavitra and Eijaz. Bigg Boss 14: Aly Goni Accidentally Catches Pavitra Punia And Eijaz Khan Romancing (Watch Video).

Talking to Spotboye, Nishant did not mince words and said, "Eijaz and Pavitra are faking their love story completely. They both have understood that the initial two fights between them were noticed by the audience so they feel whatever we do together we get extra footage. Because of which they purposely started fighting for hours and hours." Bigg Boss 14: Judge Farah Khan Tags Rubina Dilaik As Mind-Blowing, Roots for #PaviJaz (Watch Video).

"They cross all the levels while fighting and use the worst language. After a point that was also over. To un logo ne socha ab love angle laate hain. So, they started this love story. Like they literally see the cameras and start acting. Sabse zyada agar fake love story hai kisiki ghar mein to Eijaz aur Pavitra ki," he added.

When Guddan - Tumse Na Ho Paayega actor, Nishant Singh Malkhani entered Bigg Boss 14, there was a lot of expectations from him as he was quite a personality on the premiere night. However, later inside the house, we saw him getting a bit boring and also changing sides. Stay tuned!

(The above story first appeared on LatestLY on Nov 12, 2020 12:30 PM IST. For more news and updates on politics, world, sports, entertainment and lifestyle, log on to our website latestly.com).