Bigg Boss 14: Pavitra Punia Dismisses Paras Chhabra's Claims Of Two-Timing Him, Says 'When I Was With Paras that Time I Was Not Dating Anyone Else'

Bigg Boss 14 recently saw a powerhouse player, Pavitra Punia, make an exit from the show before the Finale Week began. The lady's love life was frequently in the news with many claims of the actress has cheated and two-timed in relationships. And now, here's what Pavitra has to say. 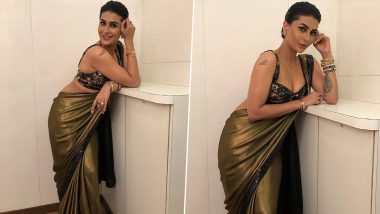 Bigg Boss 14 recently saw a powerhouse player, Pavitra Punia, make an exit from the show before the Finale Week began. However, the lady has been in the news ever since she entered the show. Also, the lady's love life was also frequently in the news with many claims of the actress has cheated and two-timed in relationships. And now that Pavitra is out of the house and got a chance to go through it all, here's what she had to say. Bigg Boss 14: Mahira Sharma Calls Out Paras Chhabra's Ex and BB14 Contestant Pavitra Punia, Claims She Was Three-Timing Paras.

"I don’t need a character certificate from anyone. I know very well whatever I was doing. Even if I was dating two people at one time, how does Paras know at what age I was dating them. I didn’t share those details with him. It was from my young days and I have no qualms admitting that I was a naughty girl. But when I was with Paras that time I was not dating anyone else," stated Pavitra in a chat with ETimes TV. Bigg Boss 14: Paras Chhabra Lashes Out At Pavitra Punia, Promises 'I Have a Lot of Things to Tell and It Will Happen Once I Am Back on the Show'.

She continued, " And when I left him and entered another relationship that person also knew about my past relationship and that I was with just him and no one else. For now I won’t comment on it. Very soon I will be coming out with my statement on the entire matter. I would not like to comment on it right now, all I want to say is that whatever happened it was my personal life. I would not allow anyone to enter my personal space. But if someone wants to ride on my success and use my name for publicity, you may continue to use my name till the time you want. I will decide when to stop you and get you down."

Recently, hotelier Sumit Maheshwari also claimed that he is still married to Pavitra and that while she was married to him, she had entered into a relationship with Paras Chhabra and he had even texted him. To this, Pavitra revealed, "For these news reports also I would say that I will talk about it very soon and I don’t want to to comment right now on these stupid people."

(The above story first appeared on LatestLY on Dec 03, 2020 04:37 PM IST. For more news and updates on politics, world, sports, entertainment and lifestyle, log on to our website latestly.com).