Into the Wild With Bear Grylls and Rajinikanth: 5 Moments From Discovery's Special Episode Jotted Down For Every Thalaiva Fan!

The biggest highlight of the entire show is how the actor who rules millions of hearts, is so simple at heart! 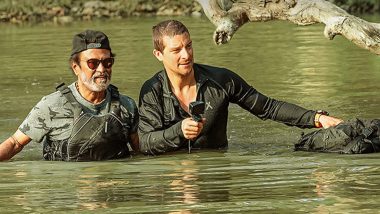 Into the Wild With Bear Grylls and Rajinikanth (Photo Credits: Twitter)

Not just Rajinikanth fans but almost every fan who is known to the Tamil superstar's hype, was eagerly waiting for Discovery Channel's special episode. Titled as 'Into the Wild With Bear Grylls and Rajinikanth', the episode is finally out. Then there are those fans who have always been a fan of any damn episode of 'Man Vs Wild' led by charming host, Bear Grylls. For this particular episode, the popular duo trod the Bandipur Tiger Reserve forest in Karnataka. So what can all the Thalaivaa fans take away from this much-awaited episode? Here are the highlights one might not want to miss. Into the Wild With Bear Grylls and Rajinikanth Review: Getting Closer to the Real Thalaiva Is More Exciting Than the Adventure.

Yes, these three stars can be seen in the episode through the video messages directed towards Rajinikanth. They showered praises on him, calling him a 'rock-star.' Just like all the fans, even this trio feels that Rajinikanth can do anything under the sky!

We all know that water crisis management is need of the hour. Two most popular personalities discussing about the same on such a huge international platform holds paramount importance. The actor and the host spoke about clean water, water borne diseases and more that is extremely educative and crucial.

Yes it is one thing to watch Rajinikanth indulge into high-octane scenes in films, and a totally different thing to watch him struggle IRL. The legendary actor had to cross a broken, rusted and a really old bridge with a 50 ft fall. Well, you know the result!

At one point, they were forced to change the flat tyre of the jeep. The superstar was asked for help and he obliged. However, he also revealed to the fans that he has never changed a tyre before! He also added that this made it the 'craziest day of his life.' (Umm, really?)

Rajinikanth Says NO To Climb..But...

It is a legit heart-breaking moment when a mega star like Rajini feels something is 'impossible.' But then, that's what these episodes are for! In one of the tasks, he had to climb a hill covered with thick bushes and trees, but with a ROPE. Shattering his on-screen action-er image, he simply refused to do this difficult task for the longest time. However, after a lot of persuasion by Bear Grylls, he finally climbed it! Talk about Thalaiva saying NO to something!

These were some of the highlighted moments from the super special episode. But the biggest highlight of the entire show is how the actor who rules millions of hearts, is so simple at heart. Well, the episode is out so...all the Rajini fans, don't miss the chance...!!

(The above story first appeared on LatestLY on Mar 23, 2020 08:01 PM IST. For more news and updates on politics, world, sports, entertainment and lifestyle, log on to our website latestly.com).