Tribes Of Europa Review: Netflix’s Post-Apocalyptic Show from the Makers of Dark Is a Visual Treat That Falters on Great Storytelling (LatestLY Exclusive)

Tribes of Europa Review: Netflix'sTribes of Europa is a six-episode post-apocalyptic German series coming from the creators of Dark. The sci-fi show is set in the future and has a riveting plot but it's quite high on violence and death which could have been avoided for sure. 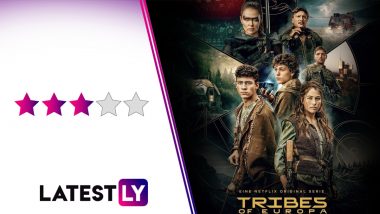 Tribes of Europa Review: Netflix's Tribes of Europa is a six-episode post-apocalyptic German series coming from the creators of Dark. The sci-fi show is set in the future and has a riveting plot but it's quite high on violence and death which could have been avoided for sure. Right from the first episode the show has your attention, where it takes us to the year 2074 as the Earth is now on a revival mode after Black December that happened in December 2029 (Apocalypse). The mystery about what forced this tragic event keeps you on the edge of your seats. Here exists the tribes that thrive to survive on planet Earth battling each other for resources, power and pride. WandaVision Review: A Terrific Elizabeth Olsen Owns The Show in Marvel Cinematic Universe’s Weirdest Offering Since Doctor Strange (LatestLY Exclusive).

Three major tribes from Europe meet each other by fate and tragedy,  the innocent Origines (Tribes of people living secretly in the forest) gets to know about an advanced Rover jet crashing in a remote area. It is the Atlantean spacecraft whose pilot is on the verge of death and he hands over the mysterious cube to the three siblings by warning them that they must find the Atlantik arc and hand this to them.  The cube getting in the wrong hands would be destructive to mankind and here comes the Crows, a fierce deadly tribe that wants this technology at any cost. Penthouse: Is Abbas-Mustan’s Netflix Film, Starring Bobby Deol, Mouni Roy and Arjun Rampal, a Remake of This Erotic Hollywood Thriller?.

The three teen siblings played by Kiano (Emilio Sakraya), Liv (Henriette Confurius), and Elja (David Ali Rashed) — move ahead with three separate narratives, Kiana getting to become the slave enters in the sinnister world of the Crows. Liv is founded by the Crimson Republic who plans to confront The Crows while Elja has the cube and he is on his way to find the lost arc with his companion Moses played by Oliver Masucci who was last seen in Dark as Ulrich Nielsen.

Check Out Tribes Of Europa Trailer Below:

The best part about the show is that it isn't dull at all, also the grand visuals are a joy to watch. Brownie points if you are watching the show on a 4k TV to enjoy the visual delight. The VFX, huge sets, picturesque locales are all the highlight of the show but just a warning that it does have a lot of violent scenes where The Crows' lifestyle might just traumatize you a bit. The unnecessary butchering and murdering scenes are overdone that makes this show quite heavy on the darker side. But that's what a quest for survival looks like in Tribes of Europa.

- No Depth In Characters

- Missed out on Great Story-Telling

Tribes of Europa a traumatizing post-apocalyptic show with an interesting plot a sci-fi nerd would absolutely love to watch. It is not excellent but not bad either, just an above-average limited series you won't regret watching. Give it a try.

(The above story first appeared on LatestLY on Mar 04, 2021 10:17 AM IST. For more news and updates on politics, world, sports, entertainment and lifestyle, log on to our website latestly.com).