Urfi Javed Talks About Her Dark Past, Reveals How a Producer Forced Her To Strip and Do a Lesbian Scene

In one of her latest interviews, Urfi Javed made some shocking revelations from her past life. As she opened a can of worms and alleged how a producer forced her to do a lesbian scene. Read the full story. 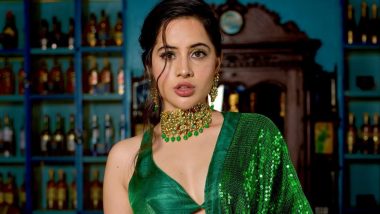 Bigg Boss OTT fame Urfi Javed is very much in news these days for being EXTRA when it comes to fashion. Be it at the airport or just a casual day out, the actress knows how to turn heads with her style shenanigans. Apart from this, she also had hit headlines recently after a few trolls tagged her as Javed Akhtar's granddaughter. Having said that, now in an exclusive conversation with ETimes TV, Urfi has gone all unfiltered and revealed some dark pasts from her life. In the interview, she alleged how a web-series producer forced her to do a lesbian scene. Urfi Javed Falsely Claimed to Be Javed Akhtar- Shabana Azmi's Granddaughter on Twitter, After Her Pictures Wearing Denim Jacket and Bra Went Viral.

Talking about the incident, she said, "When I started shooting on the first day, the producer oh my god, she made a simple staring scene into something else. She asked the male character to touch my legs. He told the actor arre iski saree ko upar karo iski panty dikhni chahiye… I was shocked and I realised she played and conned me. "

"Then they made me perform a full fledged lesbian scene. I was crying lying on the bed that I won’t be able to do it. She kept threatening me that you have signed the contract if you don’t do it we will take you to court, send you to jail. I was very new and helpless and did not know what to do," she told the portal. Urfi Javed Slams Trolls' Double Standards in Mocking Her Bikini Pics and Then Lauding a Star-Kid for The Same (Watch Video).

Urfi also mentioned that the producer also removed her clothes. "The producer she forcefully removed my clothes. I begged her not to do it. She kept shouting at the other girl arre iske kapde nikal. I was just in my br*. The next day I did not go to the shoot. I just switched off my phone. They sent me a notice of Rs 40 lakhs. I was on the verge of suicide because I didn’t know what to do or where to go," she said.

(The above story first appeared on LatestLY on Oct 23, 2021 05:24 PM IST. For more news and updates on politics, world, sports, entertainment and lifestyle, log on to our website latestly.com).