UP: Injured Leopard Rescued by Forest Department, Shifted to Etawah Safari for Treatment

A critically injured leopard was rescued by the forest officials in Meerut on Tuesday. It was shifted to Etawah Safari for treatment and care. Officials suspect that the animal got injured in a 'human-wildlife conflict.' 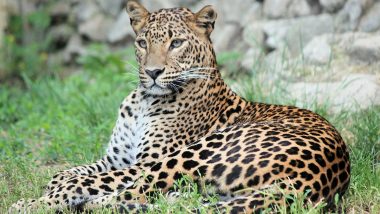 Lucknow, November 25: A leopard was rescued by the forest department in UP's Meerut on Tuesday. The animal had sustained critical injuries on its body and was not able to move its hind limbs. It was shifted to Etawah Safari for treatment in a specialised Mobile Veterinary Unit. According to the report, officials suspect that the big cat is a victim of 'human-wildlife conflict.' The leopard was reportedly spotted by villagers in Parikshitgarh on Tuesday, where it was lying in a sugarcane filed. Uttar Pradesh: 7 Booked as Leopard Dies after Getting Trapped in Noose Wire in Mathura.

According to a report by the Times Of India, the forest department officials discovered the severe injuries on the animal's body and after being sedated, the leopard was transferred to forest division headquarters for medical examination. Following which, he was shifted to the Etawah Safari with the help of an NGO called Wildlife SOS. The animal is currently under treatment at Etawah. Leopard is a male and is around 8-year-old. Leopard Attacks and Injures 2 Forest Officials in UP's Ghaziabad.

Dr RK Singh, Veterinary doctor at Kanpur Zoological Park who sedated the animal, said that he had suffered injuries in the neck, ear and shoulder and is unable to move the hind limbs. "An in-depth examination is yet to be conducted to determine the extent of injuries," Dr Singh was quoted as saying by TOI. Meanwhile, the officials suspect that the animal was injured in a wildlife-human conflict. DFO Meerut, Rakesh Kumar reportedly said, “We suspect that the leopard is a victim of human-wildlife conflict.”

(The above story first appeared on LatestLY on Nov 25, 2021 10:11 AM IST. For more news and updates on politics, world, sports, entertainment and lifestyle, log on to our website latestly.com).