Air Pollution May Up Risk of Neurological Disorders: Study

New research adds to the growing body of evidence that air pollution is significantly associated with an increased risk of hospital admissions for several neurological disorders, including Parkinson's disease, Alzheimer's disease, and other dementias. 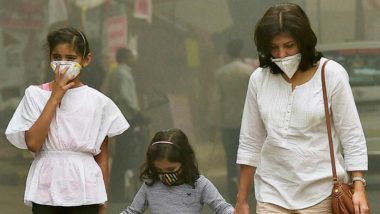 New York, Oct 21: New research adds to the growing body of evidence that air pollution is significantly associated with an increased risk of hospital admissions for several neurological disorders, including Parkinson's disease, Alzheimer's disease, and other dementias.

For the study, published in the journal The Lancet Planetary Health, the research team analysed the link between fine particulate (PM2.5) pollution and neurodegenerative diseases in the US. Delhi Air Quality: Why Does Air Pollution Rises And Air Quality Start Dipping in National Capital During Winters?

Particulate matter (PM2.5) -- tiny airborne particles smaller than 1/10,000 of an inch in diameter -- comes from various combustion-related sources including industrial emissions, transportation, wildfires and chemical reactions of pollutants in the atmosphere.

The researchers leveraged an unparalleled amount of data compared to any previous study of air pollution and neurological disorders.

"Our study builds on the small but emerging evidence base indicating that long-term PM2.5 exposures are linked to an increased risk of neurological health deterioration, even at PM2.5 concentrations well below the current national standards," said study author Xiao Wu from the Harvard University in the US.

During the study, the research team looked at 17 years' worth (2000-2016) of hospital admissions data from 63,038,019 Medicare recipients in the US and linked these with estimated PM2.5 concentrations by zip code.

Taking into account potential confounding factors like socioeconomic status, they found that, for every five micrograms per cubic metre of air (ig/m3) increase in annual PM2.5 concentrations, there was a 13 per cent increased risk for first-time hospital admissions both for Parkinson's disease and for Alzheimer's disease and related dementias.

This risk remained elevated even below supposedly safe levels of PM2.5 exposure, which, according to current US Environmental Protection Agency standards, is an annual average of 12 ig/m3 or less.

"Our study shows that the current standards are not protecting the ageing American population enough, highlighting the need for stricter standards and policies that help further reduce PM2.5 concentrations and improve air quality overall," the authors wrote.

(The above story first appeared on LatestLY on Oct 21, 2020 08:51 AM IST. For more news and updates on politics, world, sports, entertainment and lifestyle, log on to our website latestly.com).