Bharat Mata Mandir in Varanasi: No Statues of Gods and Goddesses, This Ancient Temple Features the Map of ‘Undivided’ India As Its Prime Deity, Know More About This Unique Religious Place

What makes the Bharat Mata Mandir so unique is that there are no statues of gods and goddess, but the temple features the map of an ‘undivided’ India as its prime deity and personifies ‘Mother India.’ 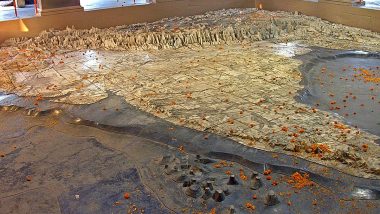 India is celebrating its 72nd Republic Day today, January 26, 2021. It is a significant day for the people of the country as it was on this date when the Indian Constitution came into force, in 1950 replacing the Government of India Act as the governing document of India and thus, turning the nation into a newly formed republic. The historical significance of our country and its struggle towards freedom is exceptional. But years before India attained its independence from the British Raj in 1947, a unique temple was established which display the power of unity, till date—the Bharat Mata Mandir in Varanasi, Uttar Pradesh. What makes the religious place so unique is that there are no statues of gods and goddess, but the temple features the map of an ‘undivided’ India as its prime deity and personifies ‘Mother India.’

The ancient city of Varanasi which is renowned for its beautiful Ganga Ghats, evening aarti, and of course, the temples have this unique construction which leaves travellers awestruck. Bharat Mata Temple is situated inside the campus of Mahatma Gandhi Kashi Vidyapith in Varanasi. The temple was built by freedom fighter, Babu Shiv Prasad Gupta and was inaugurated by Mahatma Gandhi in 1936. It is believed that Shiv Prasad created the temple thinking there already many religious places in India where gods and goddess are worshipped, but none where Mother India is prayed—which makes the temple one of its kind.

You will see the map of undivided India in place of Mother India statue inside the temple. The map is carved in white marble, and the reason for ‘undivided’ map of India is that it was built much before independence and partition of the country. The mandir displays the map of undivided India at the centre of the building showing Afghanistan, Pakistan including Balochistan, Bangladesh, Myanmar as Burma and Sri Lanka and it also depicts the mountains, plains and oceans up to scale.

Adding to the distinctiveness of the temple are the five pillars inside which symbolises five basic elements of creation, namely—fire, earth, wind, water and sky. So, the next time you plan a trip to Varanasi, make sure you visit this beautiful, and one of its kind, Bharat Mata Mandir.

(The above story first appeared on LatestLY on Jan 26, 2021 01:33 PM IST. For more news and updates on politics, world, sports, entertainment and lifestyle, log on to our website latestly.com).