From Oktoberfest to NYC Pride Parade to La Tomatina, List of Major Festivals and Events Cancelled in the Wake of Coronavirus Outbreak

The New York City has cancelled its LGBTQ+ Pride March and Puerto Rican Day Parade, for the first time in history due to the COVID-19 spread. Then again, Germany’s Oktoberfest 2020 was also cancelled because of the same. From Oktoberfest 2020 to La Tomatina Fest, here is the list of six major events that got cancelled in the wake of the pandemic. 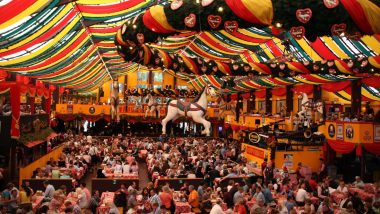 The coronavirus outbreak has gripped nations across. With the number of cases increasing rapidly, people are forced to stay indoors. This is the only way; health experts believe to contain the spread, as there is no immediate vaccine immediately available. The 2019-20 pandemic has also caused many major events around the world to be cancelled or postponed. Among the most prominent events to be affected was the 2020 Summer Olympics, which will be held in 2021. The New York City has cancelled its LGBTQ+ Pride March and Puerto Rican Day Parade, for the first time in history due to the COVID-19 spread. Then again, Germany’s Oktoberfest 2020 was also cancelled because of the same. From Oktoberfest 2020 to La Tomatina Fest, here is the list of six major events that got cancelled in the wake of the pandemic. How Many Times Has Oktoberfest Been Cancelled? From World Wars to Coronavirus, Here’s All The Time Germany's Beer Festival In Munich Had To Be Called Off!

Japan Prime Minister, Shinzo Abe, last month announced to postpone the Tokyo 2020 or 2020 Summer Olympics. It was originally scheduled to take place between July 24 and August 9, 2020. The Games have now been rescheduled for July 23 to August 8, 2021, as a result of the coronavirus outbreak.

The world’s biggest beer festival, Oktoberfest in Germany’s Munich have been cancelled. It was supposed to start from September 19 and continue till October 4, 2020. Millions of crowds from around the globe gather to cheer and try the best of beer. But the current situation forced this global festival, which was supposed to be 187th this year, to cancel its event.

The New York City Mayor, Bill de Blasio (D) has cancelled all large gatherings that were scheduled to be held in June. This includes the NYC Pride March and Puerto Rican Day Parade. This is also the first time in the history that the LGBTQ+ Pride Parade in the NYC has been cancelled.

The Bull Running festival which is hosted by the town of Pamplona, Spain has been cancelled too. The Acting Mayor of Pamplona, Ana Elizalde, told a news conference. The Municipal council agreed to suspend the event which every year is held between July 6 and July 14.

The Las Vegas’ Life is Beautiful Festival has announced that the three-day event will not happen this year. But the organisers assured to use their resources towards supporting the Vegas community. The creators if the event is working to create new initiatives that will impact supporters on a local, national and global scale, and they will make a return in the coming year.

The La Tomatina festival held in the Valencian town of Buñol, in the East of Spain has also been cancelled. As per the latest update, the Buñol City Council has confirmed the suspension of the Tomatina that was to be held on August 26, this year. It was supposed to be the 75th anniversary this year, and the current update suggests that we all will have to wait for 2021.

These are the major events that are cancelled because of the coronavirus outbreak. Along with the above list, many award ceremonies, conventions, conferences and trade shows, religious, sporting and other events are either cancelled or postponed to later dates.

(The above story first appeared on LatestLY on Apr 22, 2020 06:03 PM IST. For more news and updates on politics, world, sports, entertainment and lifestyle, log on to our website latestly.com).