The girl’s brother, who went to put the number plate on the scooty, had no idea that these three words were going to increase the problems of his family 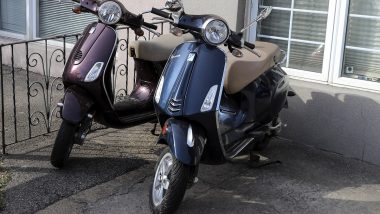 A vehicle’s number plate is one of the things that gets noticed immediately specially when a word or a number on the number plate are unique. At times it can gran eyeballs and can sometimes be a cause of embarrassment as well. A girl in Delhi is facing a similar situation. The combination of the letters on the number plate of her scooty is an unique one that has caused her major embarrassment and she hasn't been able to take the two-wheeler out even once - and it has been more than three weeks.  Wedding Guest Enjoys Food Even As Pandal Catches Fire in Bhiwandi; Video Goes Viral

A fashion designing student who used to travel via Delhi Metro from Janakpuri to Noida. But due to the long travel hours and rush in Delhi Metro, she requested her father to buy a scooty. After requesting her father for over a year, she got her hands on one this Diwali. It was a sweet Diwali gift from her dad.

The number plate for her scooty followed soon after. As per the sequence, RTO assigned her a number plate and it had the word S-E-X on it. So, her registration number reads DL 3 SEX****.

The father of the girl too had to deal with the embarrassment . He also requested for change in the number of the vehicle. According to a Delhi RTO official, “A large number of cars and scooters have received such a number and he can’t do anything about it”.

According to the delhi RTO official "Once the number of the vehicle is allotted, there is no provision to change it as of now because all this process runs on a set pattern.”

(The above story first appeared on LatestLY on Nov 30, 2021 12:38 PM IST. For more news and updates on politics, world, sports, entertainment and lifestyle, log on to our website latestly.com).