My Secret Terrius, South Korean Drama Series Predicted COVID-19 Pandemic Back in 2018? Here's The Fact Check Behind The Viral Video That Is Not From China

The Korean drama has an episode that claims that coronavirus is man made. Netizens made this video viral, saying that this series predicted coronavirus outbreak way before. However, that's not the case in reality. Here's a quick fact check. 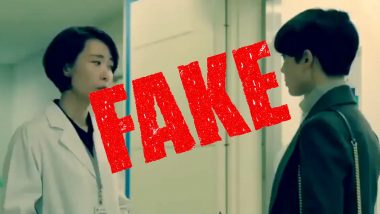 The Coronavirus (COVID-19) outbreak has taken over the world, leaving people to opt social distancing measures to combat the infectious disease. However, a surge in several theories, viral videos, WhatsApp forwards and misinformation is seen, ever since the pandemic broke out. The lockdowns in the cities have forced people to self-quarantine, for their own safety. With home quarantine comes the newly started 'Quarantine and chill' trend where people are binge-watching films/series on various digital platforms. One such Netflix series called 'My Secret Terrius' (2018) has blown everyone's minds but for a rather wrong reason. The Korean drama has an episode that claims that coronavirus is man-made. Netizens made this video viral, saying that this series predicted the coronavirus outbreak way before. However, that's not the case in reality. Also, many people are claiming that the video is from a Chinese drama which is not the case either. Here's a quick fact check. Did Prince Charles Contract Coronavirus from Kanika Kapoor During Her UK Visit? Here's The Fact Check Of The Viral Pictures.

In the video, we see a doctor claiming that the virus is man-made and that 'someone' has 'tweaked' its mortality rate from 20% to 90%. She also further says that it is in the genes of MERS and SARS and that the said person dies within 5 minutes of the exposure to it. In the video further, we also see how the characters find out that it is some well-planned biochemical terrorist attack.

In the drama My Secret Terrius that was released in 2018 (UNIQ's sungjoo was among the cast) they talked in details about the corona virus.... I had goosebumps... pic.twitter.com/nuQ3UYZlMR

Even if the netizens are mind blown with the episode, the details do not hold any truth. Coronavirus was not predicted to be grappling the world in 2020. The person also does not die in five minutes of the exposure. Even though a substantial amount of deaths have been registered across the globe, the patients are also getting cured with proper treatment and health safety measures. Hence, the 'coronavirus details' shown in the video should not be taken for what it is for it is a pure work of fiction.

Aside from the content of the viral video that talks about the "prediction" of coronavirus, there are several tweets and posts doing the rounds on social media that claim that the shot is from a Chinese drama further fueling the above misinformation.

Check Out Some of The Tweets:

A quick one.. there’s a China movie titled “My secret terrius” it was produced in 2018 and it predicted every damn crisis happening now. As we were taught how to wash how hands now it also happened in the movie and safe to say this so called virus was manipulated or man made

Guys on Netflix search for a Chinese series made in 2018 called My Secret Terrius. Go to episode 10 start it at 53:00 minutes. You'll see #Covid_19

The Series Is Not Chinese

Is it planned by china ? This is a clip of Chinese web series named My Secret Terrius which was released in 2018 on Netflix @narendramodi @PMOIndia @ZeeNews @sudhirchaudhary @realDonaldTrump @RubikaLiyaquat @BDUTT @IndianExpress @htTweets @the_hindu @anjanaomkashyap @ravishndtv pic.twitter.com/M4BJflKYVp

However, viral tweets are not true. The scene is from a South Korean drama  'My Secret Terrius'  released in the year 2018 and is a pure work of fiction. The story is of a secret service agent and its production location is South Korea; Poland (Warsaw). A simple Google search will lead you to more relevant information.

Korean series on Netflix, 'My Secret Terrius' predicted the coronavirus outbreak in 2020.

The claim is absolutely false as no prediction was done about the coronavirus pandemic. The series is a work of fiction.

(The above story first appeared on LatestLY on Mar 27, 2020 12:51 PM IST. For more news and updates on politics, world, sports, entertainment and lifestyle, log on to our website latestly.com).