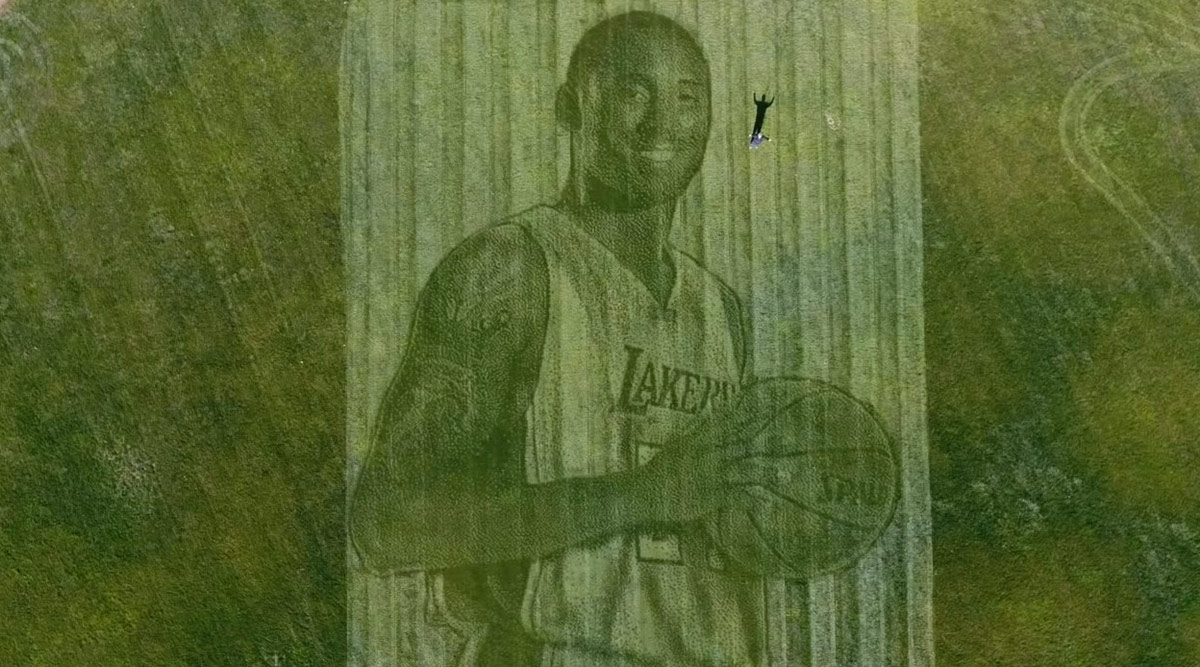 Fans will need more time to sink in the news of Kobe Bryant’s death. The helicopter crash took the life of NBA’s legend along with his 13-year-old daughter, Gianna. Tributes and murals of the late basketball player have been popping up all across the world, ever since the news of his demise broke. But one couple created a marvellous artwork which can be seen from the sky. The pair in California made a giant Kobe Bryant’s mural with the help of lawnmower and GPS to pay their tribute to the legendary sportsperson. The video showing the creation at a park in Pleasanton has gone viral on social media. Kobe Bryant Wife and Kids: Know Everything About Late NBA Star’s Family - Partner Vanessa Laine and Daughters Gianna, Bianka, Natalia and Capri.

The couple and owners of Turfprinter technology company, New Ground Technology, Pete Davis and Kelli Pearson, created the mural. According to reports, the artwork was about 115-feet tall and 92-feet wide. It first began as a simple black and white image. It was then loaded into Davis’ GPS-guided lawnmower which creates dark and light shades by bending the grass blades with air. For the couple, who said are a big Kobe Bryant fans, the decision to make the mural was only natural. #GirlDad Moments: Special Tribute to Kobe Bryant and Gianna by ESPN Journalist Elle Duncan Inspires Social Media to Cherish Father-Daughter Bond!

“For me, it’s a community effort. You feel helpless, and there’s really nothing more you can do in the situation. But in our space, I did it to represent our community and let the community be a part of this closure,” Davis was quoted in a CNN report.

The mural is just one out of many murals that have been popping up across the world. Bryant died at the age of 41 along with his 13-year-old daughter, Gianna and seven other people in the helicopter crash near Southern California.