The picture shows Priyanka Chopra and Nick Jonas both traditionally dressed as for their Indian wedding. They're holding hands and the entire Simpsons family is seen in the background smiling. 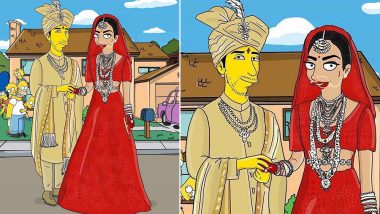 Priyanka Chopra and Nick Jonas may have got over but that does not mean the buzz around it will die down. Fans of the couple have been going gaga over their pictures that keep coming up on the internet. And while the wedding and reception here may have been done, one big reception in Los Angeles still awaits. The Desi girl who floored many Hollywood stars with her roles will hold a special reception for her Hollywood friends soon. Coming back to their pictures, one artist has imagined the pair as a part of an American sitcom The Simpsons. A satirical depiction of the working family, Priyanka and Nick have got their own looks to them. After a portrait of their Christian wedding in Simpsons character, a new picture by another artist reimagines their Indian wedding in the same. Priyanka Chopra has shared the picture on her Instagram. Priyanka Chopra and Nick Jonas’ Wedding in The Simpsons’ World! This Artwork Is Going Viral on Instagram.

The picture shows Priyanka Chopra and Nick Jonas both traditionally dressed as for their Indian wedding. They're holding hands and the entire Simpsons family is seen in the background smiling. It is indeed something unique to have reimagined the stars as a part of The Simpsons. Who knows, they might even make it to one of the episodes? Well, we can only predict. The actress seems to be loving these avatars as she shared them on her social media with love. Priyanka Chopra in Ralph Lauren Bridal Gown or in Sabyasachi Traditional Red Lehenga – Which Bridal Look Do You Love from Her Wedding – See Pics.

This picture has been illustrated by artist Rino Russo. If you check his Instagram account, you will see how he has reimagined a lot of people as Simpsons characters. Ryan Reynolds and Blake Lively have also given the Simpsons avatar by him. Besides, a lot of other people who are fans of the show have their looks caricatured into the Simpsons' family characters. We love how the couple looks perfect in the Simpsons' characters and it is a beautiful way of showcasing love towards them.

(The above story first appeared on LatestLY on Dec 25, 2018 12:28 PM IST. For more news and updates on politics, world, sports, entertainment and lifestyle, log on to our website latestly.com).