The Bangtan Boy got featured at the world’s tallest building in Dubai, with Winter Bear song being played in the background. #TaehyungOnBurjKhalifa is running as one of the top trends on Twitter with ARMY unable to contain their calm out of excitement. 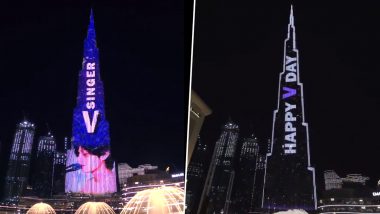 Happy V-Day ARMYs! Kim Taehyung, famously known as V, turned 25 today, and fans around the world cannot keep calm. They are doing everything possible to ensure V’s birthday is memorable and special. As the world was waiting patiently to see V being displayed on Burj Khalifa, videos and photos took over social media when the moment finally arrived. The Bangtan Boy got featured at the world’s tallest building in Dubai, with Winter Bear song being played in the background. What a moment! Fans in Dubai gathered to witness as Burj Khalifa light up with birthday boy at midnight on December 30. #TaehyungOnBurjKhalifa is running as one of the top trends on Twitter with ARMY unable to contain their calm out of excitement. In this article, we bring you the video of Burj Khalifa displaying Tae Tae, his name and cute pictures.

To celebrate Taehyung’s birthday, fans across the world have come with many things special. Charities, donations, music school and more, ARMY leaves no stone unturned to make their favourite K-Pop singer’s birthday special. Chinese fan club, CHINA Baidu Vbar, arranged for his name and visuals being displayed at Dubai’s building to ring in his birthday. Fans of BTS’ V can be seen at the spot, screaming as Burj Khalifa light, displaying Tae Tae. Words like ‘V singer,’ ‘V dancer,’ ‘V producer,’ ‘Happy V Day,’ and ‘We Purple You’ played out on the building, while fans screamed and sang along to Winter Bear.

The moment is outstanding. With this, V became the first K-Pop star and second star after Bollywood actor Shah Rukh Khan to get birthday wishes on Burj Khalifa. The video and pictures of the iconic moment are going viral on Twitter.

#BurjKhalifa celebrates the birthday of V, the South Korean singer from the popular band BTS!#TaehyungonBurjKhalifa #HAPPYVDAY

Tae in front Tae on the

of the Burj Burj Khalifa

The day has only begun, and we eagerly wait to see what more ARMYs have planned to make V-Day extra special. Taehyung turned 25 today. Fans have also booked a billboard on the famous Times Square in New York City to display a special birthday message for their favourite K-Pop singer.

(The above story first appeared on LatestLY on Dec 30, 2020 08:53 AM IST. For more news and updates on politics, world, sports, entertainment and lifestyle, log on to our website latestly.com).