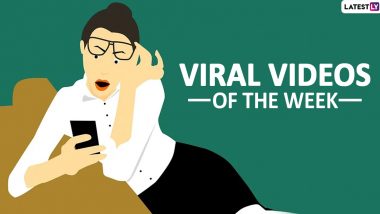 First of all, Happy 74th Indian Independence 2020, to all the readers. It is a significant day, the celebration, though it has been very limited, compared to previous years, the spirit of patriotism evoked the freedom struggle. As we continue our Independence Day celebration, it is also a time for all of us to sit and look back at the videos that went viral this week. And for viral videos of this week, we have a lot of clips, but only seven of them has made it to the list. From fluffy, ‘cloud bread,’ as the latest internet food trend to South Korean YouTuber, Shin Tae Il’s video where he sets his genitals on fire during live stream gaming, here are seven videos that gave netizens all the mixed feels.

Instagram recently found it’s another obsession, “Cloud Bread.” These aesthetically pleasing cakes are soft and colourful, compelling everyone to try making the recipe and enjoy a bite. Because, why not!

Adorable cat, named, Manchester is a hit on the internet. He is a mixture of a Scottish Straight and a Munchkin, a breed known for their little legs. But Manchester does not feel that he is shorter than the rest of the feline buddies and he can catwalk, like a pro, right to the hearts of the internet’s cat lovers.

3. Crown Prince of Dubai Won’t Use His Mercedes Because a Bird Made Nest

The Crown Prince of Dubai and the President of the Executive Council, Sheikh Hamdan Bin Mohammed Bin Rashid Al Maktoum is being praised online for his noble deed. A bird built a nest on the windshield of his Mercedes SUV, and so, Sheikh Hamdan refused to use it and has cordoned off entirely for the bird and its nest.

4. Stuntman Proposes Girlfriend While Being on Fire

Stunt actor, Riky Ash, proposed to his girlfriend, while he was on fire. His girlfriend, Katrina Dobson was stunned at his antics, and she said ‘yes.’

5. Thunderstorms in the UK

The end is nigh #2020 #edinburgh #storm pic.twitter.com/Oicf4hhVj8

Parts of England experienced severe weather conditions—heavy rains and thunderstorms amid the heatwave. Netizens were terrified by the weather change, and intense lighting show, and some of them even captured videos from their areas.

BUST A MOVE: Traffic controller shows off unique technique while directing vehicles on a highway in Australia. https://t.co/ceVS0wWTzU pic.twitter.com/0vcbDBfIVT

This video of a traffic controller from Australia was shared on Twitter, and it shows the female officer showing a few moves on the road, while directing the vehicles.

These are the seven videos that went viral on social media. We hope that the upcoming week unfurls more videos for us, with light-hearted content. Meanwhile, enjoy your weekend!

(The above story first appeared on LatestLY on Aug 15, 2020 02:14 PM IST. For more news and updates on politics, world, sports, entertainment and lifestyle, log on to our website latestly.com).