‘He Was Such a Big Wicket’: Dale Steyn, James Anderson Recall Bowling to Sachin Tendulkar

Recently, James Anderson and Dale Steyn also recalled bowling to the Indian batsman and revealed Tendulkar’s impact on the opposition bowlers. England’s highest wicket-taker Anderson said that he never had a specific plan while bowling to the Master Blaster. 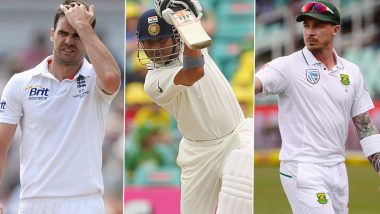 Sachin Tendulkar is widely regarded as one of the best batsmen to have stepped onto the cricket field and his records in international cricket speak volumes of his capabilities. The right-handed batsman scored runs all over the world and destroyed many potent bowling line-ups in his illustrious career. Recently, James Anderson and Dale Steyn also recalled bowling to the Indian batsman and revealed Tendulkar’s impact on the opposition bowlers. England’s highest wicket-taker Anderson said that he never had a specific plan while bowling to the Master Blaster while Steyn remembered how bowling a bad ball was a crime against him. Gautam Gambhir Picks Sachin Tendulkar As Better ODI Batsman Than Virat Kohli, Here’s Why.

“I don’t remember having a specific game plan against Sachin Tendulkar,” Anderson said. “Once he came on, I would just think that I cannot bowl a bad ball here, he was that kind of player. He was a key for India as well. If you get him out in India, the whole atmosphere, in the ground changes. He was such a big wicket,” said Anderson to Steyn while featuring on a Sky Sports Podcast.

The talismanic England pacer said that he enjoyed a fair bit of success against the former Indian batsman. However, Tendulkar also dominated him on several occasions. “You just try on bowling your best ball, top of off-stump, the whole time and hope he misses a straight one. In England, he might knick the odd one, but generally, I’d try and get him out LBW early. I had some success against him, but he had success against me as well. He got runs against us quite a lot,” he added.

Proteas pace sensation Steyn agreed with Anderson and said how difficult it was to deceive Tendulkar. “When he came in, you had to up your focus and think on how you are going to hold that length and try and hit the top of off stump. Especially in India, if you could just get the ball to get back in, you could get him out LBW. But he was so good, he rarely got out that way,” he said.

The 36-year-old also recalled the massive crowd support Tendulkar used to get while playing in India. He further talked about the impact Tendulkar had on the crowd in India. “You never want to bowl a bad ball to him. If you bowl a bad ball to him and he hits you for four, especially in India, it feels like the world is closing in on you. He might just be on 4* but he might as well be batting on 500,” he added.

Tendulkar bid adieu to the game back in 2013 but not scoring 34357 runs and 100 centuries, a record which is still safe even after more than six years. After Tendulkar’s departure, nevertheless, Kohli took on the mantle upon himself and forwarded the Master Blaster’s legacy.

(The above story first appeared on LatestLY on May 22, 2020 08:08 PM IST. For more news and updates on politics, world, sports, entertainment and lifestyle, log on to our website latestly.com).