India were restricted to a low total of 81/8 in their first innings courtesy of some fine bowling performances and despite Rahul Chahar claiming three wickets, the Sri Lankan batsmen held their nerve and ensured that they successfully crossed the line and win the series with 33 balls remaining. 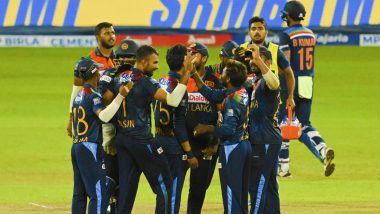 After a lot of intense competition and thrilling finishes, Sri Lanka claimed top honours as they defeated India in the third T20I by seven wickets to win the three-match series 2-1 at the R Premadasa Stadium on Thursday, July 29. India were restricted to a low total of 81/8 in their first innings courtesy of some fine bowling performances by Sri Lanka, especially Wanindu Hasaranga and some very poor decision making by the visitors. Wickets kept falling at regular intervals and there was no real momentum whatsoever. Eventually, they finished at 81/8, their third-lowest total in T20 Internationals. Defending 82 runs would always be a very big challenge for India and despite Rahul Chahar claiming three wickets, the Sri Lankan batsmen held their nerve and ensured that they successfully crossed the line and win the series with 33 balls remaining. India vs Sri Lanka 3rd T20I 2021 Highlights: SL Beat IND By Seven Wickets

India had to dig deep into their bench after Krunal Pandya tested positive for COVID-19 and other players, who had come into contact with him were kept in isolation. That meant that players like Suryakumar Yadav, Hardik Pandya and Ishan Kishan had to sit out of the match. Instead, India had to field a relatively inexperienced batting lineup. On the other hand, Sri Lanka would be happy with the performance of Wanindu Hasaranga, who on his birthday, claimed match-winning figures of four wickets and conceding just nine runs in his four overs. He was eventually named Player of the match as well as the series.

Here are some of the stat highlights from this match:

# For the first time in 13 years, India lost an international series to Sri Lanka. India's eight-series winning streak in T20I was also brought to a halt.

# This was Sri Lanka's first series win in their last five T20I series. The last time they had won a T20I series was against Pakistan under Dasun Shanaka's captaincy.

# This was India's third-lowest score in T20Is.

# Wanindu Hasaranga's 4/9 is the best figures in T20Is by a bowler on his birthday.

(The above story first appeared on LatestLY on Jul 29, 2021 11:48 PM IST. For more news and updates on politics, world, sports, entertainment and lifestyle, log on to our website latestly.com).