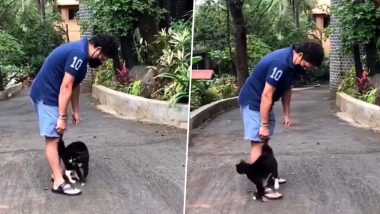 Sachin Tendulkar seems to have found a new company during the lockdown in his residence in Mumbai. Tendulkar has been confined to his house due to the COVID-19 pandemic and the master blaster has used the time to treat his fans to the other side of his life. Tendulkar has shared videos of him cooking, jogging around in his house surrounding and has kept his fans updated about his daily whereabouts. Recently a strange visitor had paid the former cricketer a visit while he was preparing ‘Vada Pav’. Tendulkar had even shared a video of the visitor peeping through the door when he was making the dish. On Tuesday, the visitor paid Tendulkar another visit on his lawn. Arjun Tendulkar to Play for Mumbai Indians in IPL 2020? Here’s Why the Young Cricketer Has Travelled to UAE With Defending Champions.

Tendulkar’s new friend and his latest visitor is a cat. The cat had paid the master blaster a visit when he was making vada pav and once again returned to the house on Tuesday. Sanchin even shared a lovely video of the cat sticking around his legs and getting cosy. “My new friend is back! Looks like he's missing the Vada Pav from the last visit,” the master blaster captioned his video. Sachin Tendulkar Shares His Monsoon Story on Social Media, Says ‘Monsoons for Me Always Calls for a Hot Cup of Tea’.

Vada Pav was, is and always will be one of my favourite snacks. Also had an unexpected visitor who looked keen to have one too... Swipe ➡️ to see the visitor 😃

Last week Tendulkar had shared some pictures from the time he was making Vada Pav and when the cat appeared for the first time in his house. In the picture, the cat, Tendulkar’s new friend, can be seen creeping into the room. “Vada Pav was, is and always will be one of my favourite snacks. Also had an unexpected visitor who looked keen to have one too..” Tendulkar had written on Instagram.

Sachin Tendulkar Gets a New Visitor

Vada Pav was, is and always will be one of my favourite snacks. Also had an unexpected visitor who looked keen to have one too... Swipe ➡️ to see the visitor 😃

Meanwhile, Tendulkar has not travelled with the Mumbai Indians squad to UAE for IPL 2020. The master blaster, who has been with the team as the mentor, has remained in Mumbai and has wished MI luck as they aim to successfully defend the title in IPL 2020.

(The above story first appeared on LatestLY on Sep 15, 2020 09:17 PM IST. For more news and updates on politics, world, sports, entertainment and lifestyle, log on to our website latestly.com).