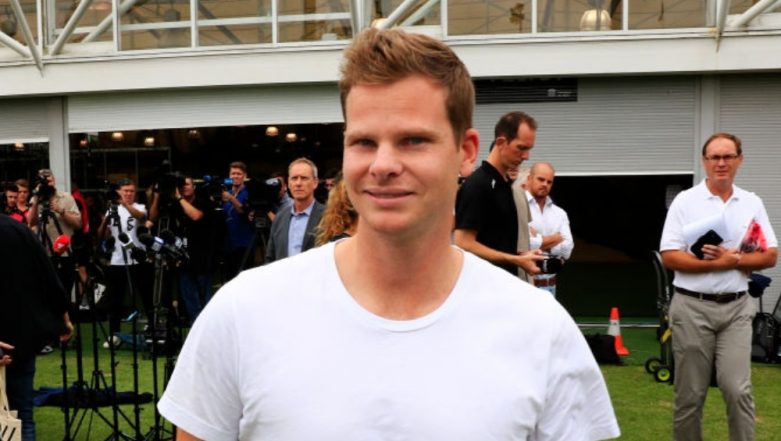 Steve Smith leaves after speaking to the media at a press conference at the Sydney Cricket Ground (Photo: Getty Images)

New Delhi, March 19: Rajasthan Royals' Steve Smith, who is gearing up for the upcoming edition of the Indian Premier League (IPL), praised his teammate Jos Buttler saying the England international is one of the most destructive batsmen around the world.

Smith, who has played two seasons for the Rajasthan Royals in the past and led them in 2015, said he is excited to play alongside the prolific wicketkeeper-batsman as he makes things easy in the middle. Steve Smith Joins Team Rajasthan Royals Ahead of IPL 2019; Franchise Welcomes the Australian Cricketer (Watch Video and Pics).

"Playing alongside Buttler will be great, batting with him makes things easier for me. He's an exciting player and one of the most destructive batters around the world. I'm really excited to play with him," Smith said during a live interaction on franchise's social media platform on Monday.

Smith returned the side after serving out a one-year international suspension for ball-tampering scandal. His Australian teammate David Warner, who is also involved in the scandal, joined his respective team.

Rajasthan will be playing their league opener against Kings XI Punjab at the Sawai Mansingh Stadium, Jaipur, on March 26.

"The Rajasthan Royals are a great franchise... Great people and hopefully we have a great year," Smith said.

"It will be great - never got the chance to play in Jaipur with the Royals... I am sure the fans will come out in big numbers and support us."