This Day That Year: Anil Kumble Scores His Maiden Test Century vs England in 2007 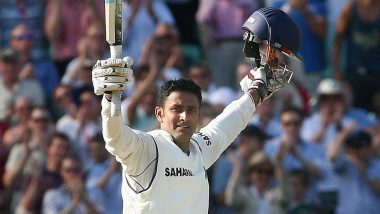 Former Indian leg-spinner Anil Kumble is regarded as one of the best bowlers ever and his record in international cricket is nothing but staggering. With 956 scalps, Kumble is still India’s highest wicket-taker in international cricket. Along with his bowling prowess, however, the legendary cricketer has also made some memorable contributions with the bat. On this day (August 10) in 2007, in fact, Kumble scored his maiden and only Test century which came against England at their own den. The right-handed batsman put on a batting exhibition in Oval and scored runs all over the park. Anil Kumble’s Memorable 10-Wicket Haul Against Pakistan in an Inning Completes 21 Years.

After electing to bat in the third Test of the series, India got off to a great start. Opener Dinesh Karthik played a brilliant knock of 91 runs and set a great base for the visitors. Skipper Rahul Dravid, Sachin Tendulkar, VVS Laxman and MS Dhoni also registered half-centuries but none of them was able to reach the three-figure mark. However, Kumble, who came out to bat at number eight, rose to the occasion and took the England bowlers by storm. Kings XI Punjab Will Be Aided by Anil Kumble’s Knowledge and Experience, Says Brett Lee.

#OnThisDay in 2007, Anil Kumble scored his only century in international cricket!

He hit a fabulous 110* in India's first-innings total of 664 against England at The Oval 🔥 pic.twitter.com/dEmkvaRCSU

The leg-spinner joined MS Dhoni at the crease and the duo added 91 runs for the seventh wicket. After the fall of the wicket-keeper batsman, Kumble became even more responsible while batting with the tail-enders. He reached his fifty and was racing towards his first Test century. However, he kept losing partners as other as India was on the verge of getting bundled out.

Nevertheless, 11th man S Sreesanth came out all guns blazing and played some blistering shots. Courtesy his resistance, Kumble went on to score his hundred as Harsha Bhogle said: ‘This is the most romantic moment in Indian cricket’.

As a result, the visitors posted a mammoth total of 664 runs in the first innings. Kumble also went to take five wickets in the match. However, England made a comeback with the bat and the match resulted in a draw.

(The above story first appeared on LatestLY on Aug 10, 2020 05:21 PM IST. For more news and updates on politics, world, sports, entertainment and lifestyle, log on to our website latestly.com).