This Day That Year: Sachin Tendulkar Scores Maiden International Hundred, a Test Saving Knock vs England and the Start of Journey to 100 International Centuries 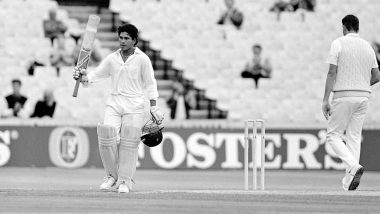 Sachin Tendulkar is a master of 100 international centuries. He holds almost every run-scoring record to his name and scored centuries in every nation he played cricket. The master blaster is the highest run aggregator in international cricket and holds the individual run-scoring records in both the Test and ODI formats. He is also the first cricketer to score a double hundred. But on this day, 30 years ago, Tendulkar scored his maiden hundred in international cricket, the first seed towards a century of hundreds. Sachin Tendulkar Thanks a Little Fan For a Beautiful Painting, Shares a Tweet on Social Media.

Tendulkar, then 17, scored a magnificent match-saving century to announce himself to international cricket against England. It was not one of his free-flowing knocks but a gritty and laboured century, which was exactly what Indian required then as they fought to save the Test on the final day of India vs England Test match in Manchester. Tendulkar scored an unbeaten 119 runs off 189 deliveries on a fifth-day track to save the Test match for his country. Sachin Tendulkar Shares His Monsoon Story on Social Media, Says ‘Monsoons for Me Always Calls for a Hot Cup of Tea’.

#OnThisDay in 1990, @sachin_rt scored his maiden international 💯 against England at Old Trafford. 🙌

The Master Blaster was 17 when he hit that magnificent knock - the third-youngest batsman ever to register a Test century. 👏👏#TeamIndia 🇮🇳 pic.twitter.com/9UqgfCqPLL

This Test was the second match of the series. England had already won the first Test by 247 runs with Graham Gooch scoring a triple hundred. Tendulkar scored 37 (both innings combined) as India went down heavily and fell behind in the series. In the second Test at Manchester, Gooch once again scored a century as did Michael Atherton and Robin Smith helping England pile 519 on board.

India replied with a fine 179 from captain Mohammad Azharuddin. Sanjay Manjrekar made 93 while Tendulkar scored 68 but India folded for 432 handing England an 87 run lead in the first innings.  England scored big again in the second innings and set India a mammoth 408 runs to win and level the series.

But the subcontinent side faltered and were down to 127/5 which became 183/6 and a defeat looked inevitable. Tendulkar was still at the crease and he was joined by Manoj Prabhakar. The young lad batted for 225 minutes and shared a 160-run partnership with Prabhakar to save the Test match for India. Tendulkar remained unbeaten on 119 while his senior partner Prabhakar scored 67 runs off 128 deliveries helping India end the game without the loss of any more wickets at 343/6 to draw the Test.

Sachin Tendulkar Scores the First of His Century of Hundreds

The Bangladesh batsman beat Pakistan’s Mushtaq Mohammad to the record. Mushtaq had scored 101 against India in 1961 when he was 17 years and 78 days old. Sachin is currently third in the list. But that day three decades ago, the world had got the first glimpse of his greatness and saw the first of his hundred international centuries.

(The above story first appeared on LatestLY on Aug 14, 2020 01:34 PM IST. For more news and updates on politics, world, sports, entertainment and lifestyle, log on to our website latestly.com).