Let-arm pace bowler Trent Boult is unlikely to be available for selection in New Zealand's first Test against England, beginning at Lord's on June 2, as the 32-year-old's team, Rajasthan Royals, is in the Indian Premier League (IPL) final against Gujarat Titans. 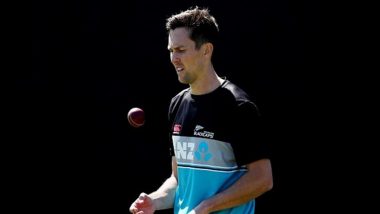 London, May 28 : Let-arm pace bowler Trent Boult is unlikely to be available for selection in New Zealand's first Test against England, beginning at Lord's on June 2, as the 32-year-old's team, Rajasthan Royals, is in the Indian Premier League (IPL) final against Gujarat Titans. The IPL final will take place at the Narendra Modi Stadium in Ahmedabad on Sunday (May 29), which means the Black Caps pace bowler will "have virtually no time to prepare properly for the first Test", a report in stuff.co.nz said on Saturday. IPL 2022: David Miller Reveals, Change in Mindset Against Spinners Is Key to His Success.

Boult took a wicket and bowled four economical overs as the Sanju Samson-led Rajasthan Royals defeated Royal Challengers Bangalore by seven wickets in Qualifier 2 on Friday to secure an IPL 2022 final berth. New Zealand are playing their second warm-up game against Counties Select XI ahead of the opening Test and with Boult not acclimatised to the England conditions or to the longest format of the game, there's a likelihood of Tim Southee, Kyle Jamieson, Neil Wagner, Matt Henry and spin bowler Ajaz Patel being in the selection mix for the Lord's game. IPL 2022 Final, GT vs RR: Here’s How Gujarat Titans Made It to the Summit of Indian Premier League 15.

New Zealand spin bowler Ajaz Patel has staked his claim for a place in the side for the first Test, grabbing 3/32 as the tourists bundled out Counties Select XI for 247 after scoring 362/9 declared in the first innings. He also scored an unbeaten 36 on Day 2 of the warm-up game and shared an unbroken 64-run stand for the last wicket with Cam Fletcher. "It is part of the game I have been working on consciously, because you can play a key role down the bottom there," Patel told the website of his batting exploits. The left-arm spinner was in sublime form during the Test series against India late last year, taking all 10 first-innings wickets in the second Test, but his feat couldn't stop India from winning the game. Patel has since not been selected in the home Tests against Bangladesh and South Africa.

(The above story first appeared on LatestLY on May 28, 2022 01:53 PM IST. For more news and updates on politics, world, sports, entertainment and lifestyle, log on to our website latestly.com).