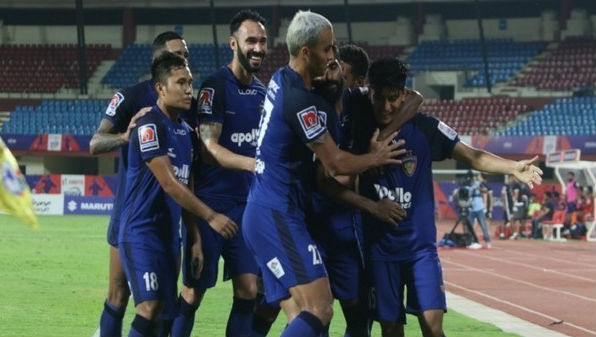 Chennaiyin FC (CFC) will host NorthEast United FC (NEUFC) in match 60 of the ongoing Indian Super League (ISL) 2019-20. CFC vs NEUFC match will be played at the Jawaharlal Nehru Stadium in Chennai on January 16, 2020 (Thursday). This is a crucial match at the bottom of the table as three points from this tie will help both the teams to keep pace with the runaway top 4. Here are some tips and team suggestions so you can build a strong Dream11 team for the Chennaiyin FC vs NorthEast United FC clash in ISL 6. ISL 2019-20 Match Result: Aridane Santana Leads Odisha FC to Victory Over Hyderabad at GMC Balayogi Stadium.

Both teams are enduring a difficult campaign as they find themselves in the lower regions of the points table. The Highlanders are ninth in the standings while Chennaiyin occupy the eighth place and a victory is a must for the sides as look to keep up with the teams in the semi-finals spot. After two winless games, Chennaiyin got back on the right path with a 3-1 victory over Hyderabad in their last ISL encounter. Meanwhile, NorthEast are without a win in six games, losing three of them. Scoring goals has been the main issue for the highlanders as they have netted nine goals in their ten games so far. Chennaiyin FC Vs NorthEast United FC - Live Football Score.

Chennaiyin FC vs NorthEast United FC, ISL 2019-20, Dream11 Team Prediction: Goalkeeper – Vishal Kaith (CFC) has been in good form and should be selected in your team.

Chennaiyin FC vs NorthEast United FC, ISL 2019-20, Dream11 Team Prediction: Forwards – Nerijus Valskis (CFC) has been scoring goals for fun in recent times and should be your captain. Asamoah Gyan (NEUFC) can be selected as your vice-captain. Andre Schembri (CFC) should be the remaining player in your team.

NorthEast United have been poor in front of the goal this season and have just score thrice away from home. Meanwhile, Chennaiyin are finding their groove in recent times as nine of their 14 goals in the season have come in the last four games.