Cristiano Ronaldo Left-Out of Juventus’ Squad for Final Serie A 2019–20 Match Against AS Roma; Twitterati React As Portuguese Forward Is Rested

Ronaldo was rested along with fellow forward Paulo Dybala as manager Maurizio Sarri aims to keep both fit and fresh for the second leg of the Champions League last 16 tie against Lyon. Juventus trail Lyon 0-1 ahead of the return leg in Turin. Ronaldo was one of the favourite for the top scorer award but had scored only once in the last three games. 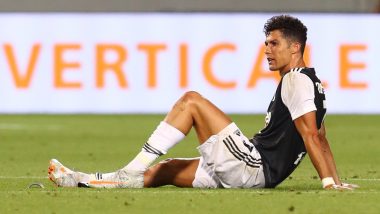 Cristiano Ronaldo was left out of Juventus’ squad for their final Serie A 2019-20 match against AS Roma at home. Ronaldo, who was on course for finishing as the Serie A’s highest goalscorer for 2019-20 season, will have to be content with 31 goals with Lazio forward Ciro Immobile now guaranteed to win the ‘Capocannoniere’ award for being the top goalscorer in Italian top-flight this season. Immobile, who has already scored 35 times, needs one more goal to equal Gonzalo Higuain’s record of 36 goals, which is the most scored by a player in a single Serie A campaign. Serie A: Cristiano Ronaldo Rested for Clash Against Roma.

Ronaldo was rested along with fellow forward Paulo Dybala as manager Maurizio Sarri aims to keep both fit and fresh for the second leg of the UEFA Champions League round of 16 tie against Lyon. Juventus trail Lyon 0-1 ahead of the return leg in Turin. Ronaldo was among the hot favourite for the top scorer award after the season restart but had scored only once in the last three games and had fallen behind on the race. Juventus vs AS Roma, Serie A 2019–20 Free Live Streaming Online & Match Time in IST.

Cristiano Ronaldo has been left out of Juve's final league game of the season.

It means Ciro Immobile will win the Serie A top scorer for the third time, and European Golden Shoe for the first time in his career. pic.twitter.com/gZ85pKrkU1

Cristiano Ronaldo in Serie A this season:

Cristiano Ronaldo Misses Out On a Big Record

Cristiano Ronaldo misses out on a big record:

Ronaldo Has Been Called Up for Today's Match

Cristiano Ronaldo has not been called up for tonight's match and would be rested. pic.twitter.com/2o9EXXSlQI

The 35-year-old played an important role in helping Juventus clinch their ninth successive Serie A title and scored 31 times this season. He also misses out on beating Felice Borel who, with 32 goals in 1932-33, holds the record for most goals scored for Juventus in a single Serie A season. Ronaldo will finish the current season on 31 league goals.

Sarri had already hinted that Ronaldo will be rested for the final match after Juventus’ 0-2 defeat at Cagliari. He had said that Ronaldo was among the players who had played the most and might be rested as the club turn their attention to the Champions League.

(The above story first appeared on LatestLY on Aug 01, 2020 08:05 PM IST. For more news and updates on politics, world, sports, entertainment and lifestyle, log on to our website latestly.com).