Twisties in Gymnastics: Here’s What Made Simone Biles Pull Out of Events at Tokyo Olympic Games 2020

While speaking to reporters Simone Biles said she was “having a little bit of the twisties.” The term has been doing rounds on the internet since then with most of the fans unfamiliar with what it is. Here’s a brief explainer of what twisties are. 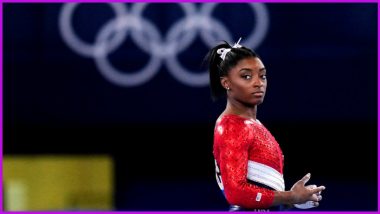 Simone Biles has now pulled out from two more events at the Tokyo Olympic Games 2020. The 24-year-old won't take part in the event finals for vault and the uneven bars. Earlier, she withdrew from the team final following one rotation, on vault and cited her mental health behind her decision to withdraw. Later, the four-time Olympic gold medallist pulled out of individual all-around final and cited the same reason. Simone Biles Withdraws from the Uneven Bars and Vault Events at Tokyo Olympics 2020, MyKayla Skinner Named her Replacement.

While speaking to reporters Biles said she was “having a little bit of the twisties.” The term has been doing rounds on the internet since then with most of the fans unfamiliar with what it is. Here’s a brief explainer of what twisties are.

What Are Twisties in Gymnastics?

There is probably no formal meaning to term ‘twisties’ but gymnasts have been using and referring to it. To get started, twisties are a mental condition. It is a 'mental block' a gymnast goes through. It may not be necessarily related to the pressure of ‘performing well’. Simply put, a gymnast has to make necessary spins while in air and his/her body is unable to judge where in air they are. And the gymnast loses control resulting in improper or undesirable landing.

Biles also shared a video on her Instagram story, explaining the ‘twisties’ the reason behind her withdrawal. Sports reporter Kimberley A. Martin took to Twitter and to further share the video.

On her IG stories, Simone Biles responds to people who think she “quit” on her team by explaining the “the twisties” she’s been experiencing and what it feels like “not having your mind and body in sync” …. pic.twitter.com/79hN973rkd

(The above story first appeared on LatestLY on Jul 31, 2021 10:56 AM IST. For more news and updates on politics, world, sports, entertainment and lifestyle, log on to our website latestly.com).