WWE WrestleMania 36 finally completed on a high note and it indeed provided a good amount of entertainment to fans. Most importantly, WWE showcased the high spirit by organising its flagship event without hampering any precautionary measures of coronavirus. 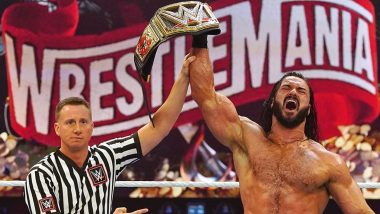 WWE WrestleMania 36 finally completed on a high note and it indeed provided a good amount of entertainment to fans. Most importantly, WWE showcased the high spirit by organising its flagship event without hampering any precautionary measures of coronavirus. The show might have taken place at the Performance Center in Orlando, Florida behind closed doors, however, it did keep fans around the world on its seat. Now speaking about results of WrestleMania 36 part 2, Drew McIntyre defeated Brock Lesnar to become new WWE Champion, while Edge finally had his revenge done by defeating Randy Orton in last man standing match. Meanwhile, you have arrived at the right platform, if you are looking for results and highlights of WrestleMania 36 part 2. WWE WrestleMania 36 Part 1 Results and Highlights: Braun Strowman Defeats Goldberg to Become New Universal Champion; The Undertaker Walks Out Victorious in Boneyard Match (View Pics)

Brock Lesnar hit McIntyre with multiple F5, however, it wasn't enough to defend his title. The Scottish Psychopath who started off the match with a claymore kick walked out victorious. Speaking about Edge and Randy Orton match, both wrestlers fought their heart out and made their match as the best match of WrestleMania 36. The last man standing match between these two wrestlers will be remembered for ages, the Rated R was in tears after emerging victorious against The Viper. Now let us have a look at some glimpses of the show of shows. WWE SmackDown April 3, 2020 Results and Highlights: ‘The Fiend’ Bray Wyatt Plays Mind Games With His WrestleMania 36 Opponent John Cena (View Pics)

Edge With Some Innovation

Randy Orton With His Dangerous Moves

"You don't need to count. I'll tell you when to count."@RandyOrton is in complete control of this #LastManStanding Match. 😳 #WrestleMania pic.twitter.com/KqI9cX371j

Quite literally diving into the #247Title picture is none other than @RobGronkowski! #WrestleMania pic.twitter.com/zdCJdGnI4M

@dmcintyrewwe KICKED OUT OF THE #F5 AT 1!! #BrockLesnar can't believe it! #WrestleMania

What did we just watch?! 👀😳 #WrestleMania

WHAT is HAPPENING inside the #FireflyFunHouse at #WrestleMania?!?! @johncena #BrayWyatt

The Street Profits successfully defended their Raw Tag Team titles against Angel Garza and Austin Theory. If yesterday we saw The Undertaker stunning the crowd, today it was another WWE Hall of Famer Edge blow us crazy. It must be noted that Edge and Randy Orton battled in almost all areas of Performance Center, also The Viper started off the match with multiple RKOs. However, in the end, Edge proves that he is still the best in the business. Now, it will be interesting to see, how WWE plans script for the coming days. Raw and SmackDown will continue to telecast at the Performance Center in Orlando, Florida.

(The above story first appeared on LatestLY on Apr 06, 2020 01:49 PM IST. For more news and updates on politics, world, sports, entertainment and lifestyle, log on to our website latestly.com).