Microsoft has now officially become the third most valuable company in the world. With Microsoft's current market capitalization at $749 billion compared to Alphabet's 739 billion, Microsoft dethroned Alphabet for the third-place. 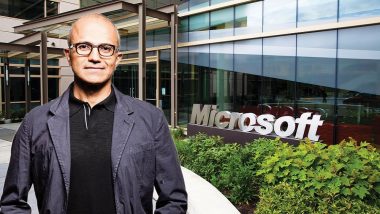 The current ranking stands as -- Apple at first place followed by Amazon at second, and Microsoft in the third spot.

Alphabet, the parent company of Google and several offshoots like Waymo and Google Fiber, has been leading Microsoft since it was first formed in 2015. But over the past few months, Microsoft slowly gained ground due to its valuable cloud computing business, according to a report by CNBC.

Microsoft's shift toward a "cloud-first" world has contributed to its bottom line as its Azure service has been giving serious competition to Amazon Web Services. The other contributor to Microsoft’s strong performance has been its shift to subscription-based models for its software and services. Thanks to Office 365, consumers and businesses alike can pay a monthly fee instead of one time hefty payment upfront. This has been hugely successful for the company as consumer subscribers for Office 365 hit 30.6 million last quarter, according to the company's last earnings report, while its business customers hit a record 135 million monthly actives. Microsoft CEO Satya Nadella has also looked at strengthening the company’s work in machine learning which is expected to pay dividends in the long-term.

The Verge notes that in Microsoft’s most recent quarter its Windows, Surface, and gaming divisions made up roughly 35 percent of revenue, with cloud taking around 30 percent, and Office and productivity more than 30 percent. The current trend in earnings combined with its investment in cloud services could push Microsoft to a $1 trillion market value.

(The above story first appeared on LatestLY on Jun 01, 2018 10:51 AM IST. For more news and updates on politics, world, sports, entertainment and lifestyle, log on to our website latestly.com).