New upcoming OnePlus 6 will be the next-in flagship device from OnePlus which will replace the current OnePlus 5T. 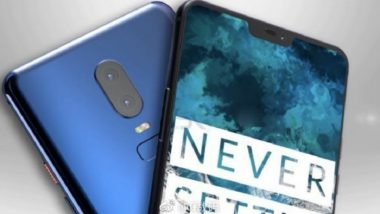 OnePlus 6 is undoubtedly one of the most awaited smartphones which is slated to be launched in the domestic market on May 17. The Chinese smartphone maker will be also be launching the new OnePlus 6 smartphone in the global market on May 16. To be retailed in the Indian market exclusively via Amazon India, the flagship device from OnePlus has become the first smartphone to shoot a cover photo for a Vogue India – a popular fashion magazine in India. The smartphone is expected to be offered in 3 variants – 4G/64GB, 6GB/128GB and 8GB/256GB. See More: OnePlus 6 India Price Leaked Ahead of Launch Date; Likely to Start From Rs 36,999

Making headlines already 📰 Here's your first glimpse into the power of the #OnePlus6 camera as it becomes the first smartphone ever to shoot the cover photo for a magazine in India! @VOGUEIndia @aditiraohydari pic.twitter.com/fovuKBcQ9G

The Chinese smartphone making company is leaving no stones unturned in creating the much required hype for its next-in flagship device. The company has been teasing the OnePlus 5T successor for quite some time now.

As far as technical specs are concerned, the new OnePlus 6 will come powered by Qualcomm's Snapdragon 845 processor which will be coupled with up to 8 of RAM & 256GB of onboard storage capacity. It will feature 6.28-inch touchscreen AMOLED display panel with iPhone X like notch. The smartphone will also carry dual camera setup along with a single selfie shooter. Read More: OnePlus 6 Live Image Surface Online Before May 16 Launch: Expected Price, Features - Everything To Know

Other features likely to be seen on the flagship device are Face Unlocking feature, dash charging, re-positioned alert slider, fingerprint sensor, Oxygen OS based Android Oreo and 3.5mm headphone jack. Going by the leaked details, it is rumored that the entry level variant of OnePlus 6 (4GB+64GB) will get starting price of Rs. 36,999. On the other hand, the mid-level variant with 6GB RAM and 128GB of storage is likely to get Rs. 39,999 in India while, the top end variant could be priced at Rs. 44,999. However, the exact prices for the smartphone will be revealed on the launch day itself.

(The above story first appeared on LatestLY on May 02, 2018 02:01 PM IST. For more news and updates on politics, world, sports, entertainment and lifestyle, log on to our website latestly.com).