Will the world end on December 21? If recent conspiracy theories are to be believed, it has an apocalyptic significance. The date when Christmas star will occur is considered vital by some Christian groups, as they claim that the Mayan calendar will run out on December 21, the supposed date of world end. 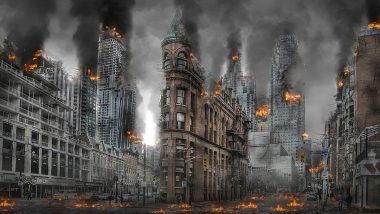 It seems like 2020 have a lot more in store to increase our stress before the year finally ends. While the great conjunction of Jupiter and Saturn marks a significant astronomical event, conspiracy theorists see it as a prophetic sign. Just a few days ago, NASA rubbished a viral hoax stating that the planet Earth will go dark for six days. Ahead of the winter solstice, end of the world prophecies resurface. Will the world end on December 21? If recent conspiracy theories are to be believed, the date has an apocalyptic significance. Yes, you read that right. The date when Christmas star will occur is considered vital by some Christian groups, as they claim that the Mayan calendar will run out on December 21, the supposed date of world end.

Will the World End on December 21?

December 21 is the beginning of the winter solstice, and famed doomsday predictor Pastor Paul Begley believes it is all a recipe for disaster for life on Earth. He cited the Mayan calendar and the alignment of the two planets—Jupiter and Saturn on the same date. The orbits of the two planets will take them so close together, that they will form a ‘double planet’ phenomenon. Pastor Begley notes that the Mayan calendar has been resurrected and points out this date as one of apocalyptic significance.

“It will be the closest Jupiter and Saturn have been since 1623 and it won't even come that close again for another 500 years,” Pastor Begley was quoted in media reports. “So this is so rare and it's going to be on the winter solstice. It's going to be on December 21, 2020. The Mayans are now reorganising and saying this could certainly be the end of the world as we know it,” he added.

Pastor Begley is known for his wild end of the world predictions. However, it is worth noting that Begley’s claim is not yet backed by any hard evidence. He has made plenty of doomsday predictions in the past—all of which, thankfully, was not true. The Mayan calendar is a system of calendar and almanacs which were used by several cultures in Central America. It dates back to the 5th century BCE.

2020 has certainly been one insane ride and is something between a disastrous end and a beginning of another era. With the COVID-19 pandemic sweeping across the globe and countries imposing lockdowns to tackle the spread of the virus, the year has been quite challenging. The upcoming great conjunction of Jupiter and Saturn on Winter Solstice is a rare event, and if we are lucky enough not to have cloudy skies, the astronomical occurrence should be visible to the world.

(The above story first appeared on LatestLY on Dec 20, 2020 08:13 PM IST. For more news and updates on politics, world, sports, entertainment and lifestyle, log on to our website latestly.com).