Full Moon 2020 Names’ List and Meanings: From July Buck Moon to October the Hunter Moon, Here Are Unique Names of the Celestial Events You May Not Have Known

As we begin the month of July, we at LatestLY, bring you the different and unique names and its meanings of our beloved Moon, a celestial body which we see orbiting around our planet around the year. From July Buck Moon to October the Hunter's Moon, here are the unique names of the celestial events you may not have known. 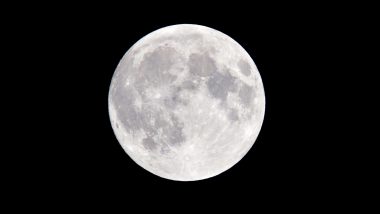 Unique Names of the Moon: How many Moons does the planet Earth have? We all know, one. But did you know that our Moon has different names? Twelve to be precise. Surprising? Well, it may be surprising for you to find out, but that’s a fact. However, you should be knowing a few things before you think why there are 12 names of the Moon. Are you aware of the fact that is a minimum ‘one full moon phase’ in a month? Given the count, there are a total of 12 full moons that occur throughout the year, which have a unique name and meaning. Well, that’s how the Moon is called with several names around the year. As we begin the month of July, we at LatestLY, bring you the different and unique names and its meanings of our beloved Moon, a celestial body which we see orbiting around our planet around the year. From July Buck Moon to October the Hunter's Moon, here are the unique names of the celestial events you may not have known. Buck Moon 2020 Date and Time: Know Everything About the Full Moon of July Coinciding With Penumbral Lunar Eclipse.

It is a known fact that deer shed their antlers every year, and the time they regrow is July. Hence, the Moon is given a native American name in July, i.e. Buck Moon. It is also popularly called as the Thunder Moon, and the Hay Moon.

Sturgeon is a collective term given to a family of fish that house 27 fishes. The Moon is called the Sturgeon Moon in August because sturgeons appear in number during this period. It is also popularly called the Green Corn Moon, the Red Moon, and the Grain Moon.

It is said that September is the time when crops, especially corn, are harvested. The Moon is said to appear too brightly in the night which enables the farmers to work in the moonlight. Hence, it is named as the Full Corn Moon. It is also popularly called as the Harvest Moon, and Barley Moon.

The month of October is usually called as the hunter’s season, where people prefer to hunt fox and deer who are unable to hide in the farmlands and fields. Hence, it is named as the Hunter’s Moon. It is popularly also called the Travel Moon and the Dying Grass Moon.

There are several theories as to why the November Moon is called the Beaver Moon. Some say that back in the day, people used to set traps for beavers for easy extraction of wool from them. It is also popularly called as the Frost Moon.

One would easily guess it as to why is the December Moon named as a Cold Moon. Well, it is the onset of winter in this season/month that gives its name. It is also popularly called as the Long Night Moon and the Oak Moon.

It is said that wolves howl a lot at this time of the year due to the scarcity of water available in the midwinter season. Hence, the January Moon gets its name, i.e. Wolf Moon, from here. It is popularly also called as Ice Moon and Old Moon.

The month of February sees a lot of snowfall take place in different geographies around the world. The weather is mainly frosty, too cold, and snowy in this month. Hence, it is called the Snow Moon. It is popularly also called the Storm Moon and the Hunger Moon. List of Full Moon in 2020 Calendar: From June 5 Strawberry Moon to July 5 Thunder Moon to December 30 Cold Moon, Here's Complete List With Names and Dates.

The March Moon got its name, i.e. the Worm Moon, from the worm trails that are seen generally during this period of the year. It is also popularly called as the Chaste Moon, the Death Moon, the Crust Moon, and Sap Moon.

It’s the season of blooming wildflowers in different parts of the world. There are different species of the wildflower that bloom in this month. Hence, the name Pink Moon is derived from there. It is popularly also called as the Sprouting Grass Moon, the Fish Moon, and the Egg Moon.

May: The Flower Moon

The May moon is called the Flower Moon as it is considered as the season of blooming in the majority of the world. It’s also the onset of spring in many countries, which sees abundant species of flowers bloom this time. It is also called as the Hare Moon, the Corn planting Moon, and the Milk Moon.

June is the month usually associated with the harvesting of strawberries around the world. Hence, it gets its name from there. It is also called the Rose Moon, and the Hot Moon.

Now that you know 12 different and unique names of the Moon, it’s your chance to turn heads by being the know-it-all person in the room. Also, it would be a great chance for you to teach young children and share this piece of knowledge with space and astronomy enthusiasts.

(The above story first appeared on LatestLY on Jul 04, 2020 10:52 AM IST. For more news and updates on politics, world, sports, entertainment and lifestyle, log on to our website latestly.com).