Sheth announced that operations at Realme's ‘Make in India' facility will be temporarily stopped until further notice from the government. 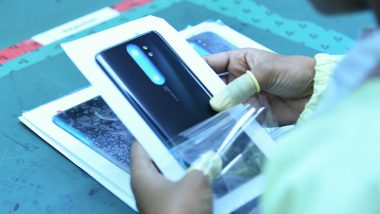 New Delhi: Smartphone makers Xiaomi and Realme on Wednesday said they have postponed launches of their upcoming smartphones in India owing to the nationwide 21-day lockdown. Realme postponed the launch of Narzo series which was previously scheduled for launch in India on March 26, while Xiaomi extended the launch of Mi 10 which was scheduled on March 31. Huawei P40, P40 Pro, P40 Pro+ Smartphones Launching Today; Watch LIVE Streaming of Huawei Flagship Product's Launch Event.

"With respect to the announcement made by our Prime Minister on March 24, we have decided to suspend all upcoming launches including #realmeNarzo series. Time for us to focus on our family and ourselves. Stay at home, stay safe and cooperate with local authorities," tweeted Realme India CEO Madhav Sheth.

Sheth announced that operations at Realme's ‘Make in India' facility will be temporarily stopped until further notice from the government. Vivo has also rescheduled the launch of its upcoming mid-range smartphone -- Vivo V19 that will come with a dual-camera punch-hole and quad-camera system.

(The above story first appeared on LatestLY on Mar 26, 2020 10:33 AM IST. For more news and updates on politics, world, sports, entertainment and lifestyle, log on to our website latestly.com).