Thousands of residents have abandoned their homes with warnings of rain with tornadoes warnings being issued by authorities. 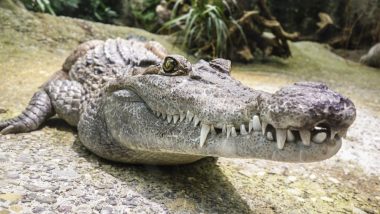 Following heavy rains, people in northeast Australia are witnessing once-in-a-century floods. Thousands of residents have abandoned their homes with warnings of rain with tornadoes been issued by authorities for the next few days. Reportedly, a three-metre crocodile was seen on Bowen Rd near Rosslea by emergency services on Sunday night.

And as the water level continues to rise, city officials have opened floodgates of dams leading to rodents and reptiles flooding the streets. Eric Han took to Facebook sharing the photo of a freshwater crocodile she spotted in front of her father Shaun's house in O'Reilly St, Mundingburra. She reportedly said, "He saw a small freshwater croc and called my family out to look. The property is fine, water lapping at the footpath. The crocodile swam off back down the street." As per reports, the water is full of snakes in the affected regions. Australia Floods 2019: Military Deployed to Tackle 'Once-in-a-Century' Devastating Floods, 20,000 Homes Feared Lost.

While northern tropical regions of Australia experiences rains during this time of the year, the current situation is above normal levels. A resident of Annandale shared a photo of a freshwater crocodile climbing a tree avoid the floodwaters. The reptile was spotted somewhere around Palmetum and the Good Shepherd Home.

The flood comes amidst as several regions are experiencing drought conditions due to the severe temperatures. PTI quoted Queensland Premier Annastacia Palaszczuk as saying, "It's basically not just a one in the 20-year event, it's a one in 100-year event. It is a welcome relief, especially in our western communities, to not only get the rain but also to fill up their dams. We're getting food supplies in there. We still have many roads that are cut around those areas."

(The above story first appeared on LatestLY on Feb 04, 2019 09:23 AM IST. For more news and updates on politics, world, sports, entertainment and lifestyle, log on to our website latestly.com).