'China Has Pattern of Instigating Territorial Disputes': Mike Pompeo Hits Out at Beijing Over Border Rows With Neighbours, Coronavirus Outbreak 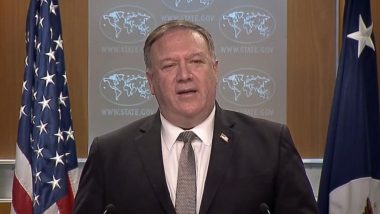 Washington, July 8: US Secretary of State Mike Pompeo on Wednesday lashed out at China and its ruling Chinese Communist Party (CCP) over a range of issues, including the coronavirus outbreak and border disputes. Mike Pompeo slammed China for "hiding" information on coronavirus (COVID-19) and urged countries to come together against Beijing's "bullying". He also said the United States would restrict visas for some Chinese officials over "human rights abuses" in Tibet. TikTok to be Banned in US? Donald Trump Says 'It's Something We're Looking At' to Punish China.

Mike Pompeo hit out at China over its border disputed with neighbouring countries such as India and Bhutan. "There aren't many neighbours that can satisfactorily say that they know where their sovereignty ends and the Chinese Communist Party will respect that. That is certainly true now for people of Bhutan," Pompeo said referring to Beijing's objection to the grant for Sakteng Wildlife Sanctuary (SWS) in eastern Bhutan's Trashigang district bordering India and China, claiming that the location was disputed.

"From mountain ranges of Himalayas to waters of Vietnam's exclusive zone to Senkaku islands and beyond. Beijing has a pattern of instigating territorial disputes. The world shouldn't allow this bullying," Pompeo said, calling the world to unite against China. WHO Team to Visit Beijing to Trace Origin of COVID-19: China.

Referring to the clash between Indian and Chinese troops in Galwan valley, Mike Pompeo said New Delhi did its best to counter Beijing. "I have spoken with Foreign Minister S Jaishankar a number of times about this. Chinese took incredibly aggressive actions and Indians have done their best to respond to that," he said.

#WATCH - I have spoken with Foreign Minister S Jaishankar a number of times about this. Chinese took incredibly aggressive actions and Indians have done their best to respond to that: Mike Pompeo, US Secretary of State on India-China border tensions pic.twitter.com/eJEVZkM9Ez

The US State Secretary slammed China's ruling Chinese Communist Party (CCP) over the coronavirus outbreak, adding that the Trump administration is trying to ensure the privacy of Americans. "CCP has an enormous credibility problem, they failed to tell the world the truth about this virus & now hundreds and thousands of people are dead," Pompeo said. "With respect to Tik Tok, I want to put it in a broader context. We have been engaged in a constant evaluation about ensuring that we protect the privacy of American citizens and their information," he added.

(The above story first appeared on LatestLY on Jul 08, 2020 08:41 PM IST. For more news and updates on politics, world, sports, entertainment and lifestyle, log on to our website latestly.com).