A Palestinian was killed by Israeli army fire during clashes on the Gaza border, the health ministry in the Hamas-run enclave said Saturday. 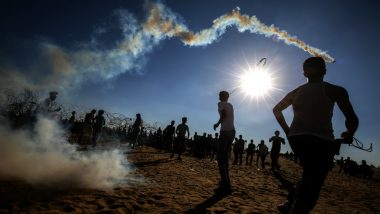 Gaza City, July 27: A Palestinian was killed by Israeli army fire during clashes on the Gaza border, the health ministry in the Hamas-run enclave said Gaza Border ClashesSaturday.

The ministry said Ahmed Qura, 23, died "as a result of wounds sustained (from) the Israeli occupation forces' fire" on Friday. He had been hit in the stomach during demonstrations along the border fence east of Khan Yunis in southern Gaza.

"Approximately 5,500 rioters and demonstrators gathered at the Gaza Strip security fence," a spokeswoman told AFP, saying that some threw explosive devices and grenades and tried to approach the fence.

She was unable to confirm if any Palestinians were hit but said no soldiers were injured.

Since March 2018, Palestinians in Gaza have been holding often violent demonstrations along the heavily guarded Israeli border. Israeli forces often fire on the demonstrators, saying they are seeking to prevent the border being infiltrated.

The protests have declined in intensity in recent months and Qura's was the first death in weeks. Another 38 Palestinians were hit and wounded with live ammunition on Friday, the health ministry said in a separate statement.

(The above story first appeared on LatestLY on Jul 27, 2019 01:35 PM IST. For more news and updates on politics, world, sports, entertainment and lifestyle, log on to our website latestly.com).