Saudi Arabia on Wednesday said it will remove restrictions tying millions of low-paid and vulnerable migrant workers to their employers. 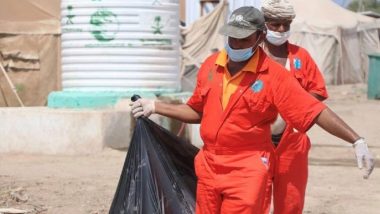 Riyadh, November 4: Saudi Arabia on Wednesday announced major long-due reforms concerning migrant labourers. As part of the reforms in the "kafala" system, Saudi Arabia's Ministry of Human Resource and Social Development said it will remove restrictions tying millions of low-paid and vulnerable migrant workers to their employers, which had often led to abuse and exploitation. Called the Labor Relation Initiative, the reforms will come into effect in March 2021. Saudi Ministry Issues Clarification After Report on Pending Decision to Abolish Kafala System.

Under the new policy adopted by Saudi Arabia, migrant workers will have the right to change jobs by transferring their sponsorship from one employer to another, reported AP. Currently, they cannot shift from one job to another. Riyadh also removed the condition of the employer's consent for leaving or re-entering the country. At present, migrant labourers need their employer's permission to leave Saudi Arabia. Saudi Arabia Grants UAE's Request To Let Flights 'Coming From And Departing to All Countries' Fly Over Its Airspace.

These restrictions are part of "kafala", a sponsorship system in place across multiple Gulf Arab nations that ties foreign workers' legal status to their employer. Saudi Arabia also abolished the condition of the employer's consent for obtaining final exit visas. Despite these changes, migrant labourers would still require an employer to sponsor them to come to Saudi Arabia and employers may still have control over their residency status.

According to Saudi Arabia's Deputy Minister Abdullah bin Nasser Abuthnain, the reforms in labour system will affect potentially around a third of Saudi Arabia's total population, or approximately 10 million foreign workers in the kingdom.

(The above story first appeared on LatestLY on Nov 04, 2020 08:34 PM IST. For more news and updates on politics, world, sports, entertainment and lifestyle, log on to our website latestly.com).