With escalating violence in Sri Lanka, including torching of houses belonging to ruling party politicians and family members of President Gotabaya Rajapksa, armed forces have been given orders to open fire at anyone causing personal harm, or damaging/looting the properties of others. 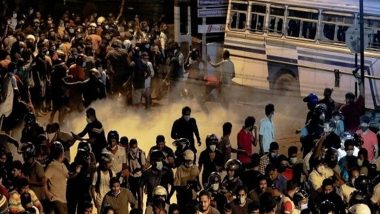 Colombo, May 10: With escalating violence in Sri Lanka, including torching of houses belonging to ruling party politicians and family members of President Gotabaya Rajapksa, armed forces have been given orders to open fire at anyone causing personal harm, or damaging/looting the properties of others.

Eight people, including a politician from the ruling party, a police officer and civilians, have been killed since violence nroke out on Monday, while as many as 219 injured persons are undergoing treatments at government hospitals. Sri Lanka Economic Crisis: President Gotabaya Rajapaksa Declares State of Emergency Effective From Midnight

Secretary in the Defence Ministry, Kamal Gunaratne, said that 60 vehicles, including buses and jeeps, have been torched and over 40 vehicles have been damaged since Monday.

"While peaceful protest is being conducted, there are sections of the society who have resorted to violence and looting. We are going to strictly impose the law against anyone violating it," the Defence Secretary said. Sri Lanka Economic Crisis: PM Mahinda Rajapaksa Says, 'Government Will Take All Possible Steps To Resolve the Crisis'

Amid the spread of violence, President Rajapaksa has extended the curfew from Wednesday to Thursday.

Gunaratne said that acts of violence are continuing throughout the country, ignoring the state of Emergency and curfew imposed by the President.

Going through its worst economic crisis, Sri Lanka on Monday was engulfed with violence after supporters of resigned Prime Minister Mahinda Rajapaksa attacked the peaceful protesters, who are on the streets for more than a month now, raising their voice against the severe economic crisis the country is going through.

The protesters have demanded resignation of the President and his Cabinet.

The angry mob attacked the houses of ex-PM Mahinda Rajapaksa, former Finance Minister Basil Rajapaksa and elder brother Chamal Rajapaksa on Tuesday, while properties of many ministers, MPs and local politicians of the ruling party were torched.

The mob also destroyed a museum built in the memory of the President's parents.

Sri Lanka, which is reeling under severe economic crisis, is now going through a political catastrophe as well.

Responding to the crisis, including the violent attacks, India said on Tuesday, "As a close neighbour of Sri Lanka with historical ties, India is fully supportive of its (Sri Lanka's) democracy, stability and economic recovery."

In response to media queries on developments in Sri Lanka, the official spokesperson of India's Ministry of External Affairs said in New Delhi, "India will always be guided by the best interests of the people of Sri Lanka expressed through democratic processes."

India also noted that it has assisted her southern neighbor with over $3.5 billion financial assistance for mitigating the shortages of essential items such as food, medicines etc.

(The above story first appeared on LatestLY on May 10, 2022 11:06 PM IST. For more news and updates on politics, world, sports, entertainment and lifestyle, log on to our website latestly.com).